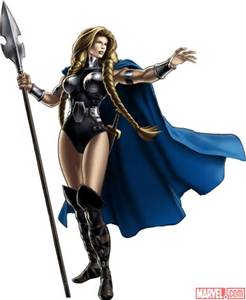 Little is known about Valkyrie's life before the Masters of Evil's attack on Asgard. It can be assumed to be similar to his mainstream counterpart.

During the Ultimate Alliance's quest to free Bifrost Bridge, Valkyrie asked the heroes to recover her sword, Dragonfang. She then helped the heroes free Asgard and Loki was imprisoned, thus Ragnarok never came to pass. Weasel had a crush on Valkyrie, but she was annoyed by him and was instead attracted to Deadpool, though he didn't reciprocate her feelings.

Brunnhilde has had extensive training in unarmed combat swordplay, and horseback riding. Her natural fighting ability is unsurpassed among Asgardian women, and is perhaps equaled only by Sif.

Retrieved from "https://marvelcomicsfanon.fandom.com/wiki/Brunnhilde_(Earth-6109.2)?oldid=199865"
Community content is available under CC-BY-SA unless otherwise noted.