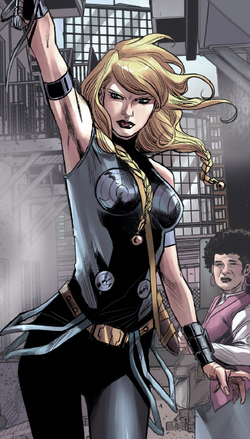 Brunnhilde was an honorable warrior that eventually fought against the Frost Giants of Jotunheim and died in battle while protecting a fellow Asgardian from Laufey's infamous spear.

When she was in the gates of Valhalla, she refused to enter, and asked the All-Father if there was a way she could return into the battle in order to save her fellow warriors.

The All-Father made her the champion of the slain, the Valkyrie and restored her to the battlefield, where she helped the Asgardians to win.

Some time later, she became engaged to Loki and the two eventually married.

While searching for the first hammer of the worthy, Mjolnir, she made an alliance with Ant-Man and Doctor Strange along with the Warriors Three and created the All-Mighty Defenders to battle Thor Malekithson.

To be added when the time is right.

Valkyrie often feels superior to normal humans and some Asgardians, but will risk her life to protect every innocent soul.

Brunnhilde the Valkyrie possesses all the superhuman attributes common among the Asgardians.

Superhuman Strength: Brunnhilde, like all Asgardians, possesses superhuman strength. She is significantly stronger than any other Valkyrie, and most other Asgardian men and women for that matter. She can lift up to 45 tons whereas the average Asgardian male and female can lift 30 and 25 tons respectively.

Superhuman Speed: Brunnhilde can run and move at speeds that are beyond the natural physical limits of the finest human athlete.

Superhuman Stamina: Brunhilde's advanced musculature produces considerably less fatigue toxins during physical activity than the musculature of a human being. At her peak, she can exert herself physically at peak capacity for about 24 hours before the build up of fatigue toxins in her blood begins to impair her.

Superhumanly Dense Tissue: Brunhilde's bodily tissue, like that of all Asgardians, possesses about 3 times the density of the bodily tissue of a human. As a result, she is much heavier than she appears and her denser tissue contributes somewhat to her physical strength.

Superhuman Durability: Brunhilde's body is much harder and more resistant to conventional forms of physical injury than the body of a human. She can withstand falls from great heights, exposure to extremes in both temperature and pressure, high caliber bullets, and tremendous impact forces without sustaining injury.

Superhuman Agility: Brunhilde's agility, balance, and bodily coordination are all enhanced to levels that are beyond the physical limits of the finest human athlete.

Superhuman Reflexes: Brunhilde's reflexes are similarly enhanced and are superior to those of the finest human athlete.

Superhuman Longevity: Like all Asgardians, Brunnhilde is extremely long lived and ages at a pace much slower than that of a human being. However, unlike some other god pantheons like the Olympians, Asgardians do continue to age.

Regenerative Healing Factor: Despite her body's great resistance, Brunnhilde can sustain physical injury just like any other Asgardian. If injured, her metabolism enables her to rapidly regenerate damaged bodily tissue faster and more extensive than a human being is capable of. Injuries such as slashes and puncture wounds can heal completely within a matter of hours and broken bones within a matter of days. However, she isn't able to regenerate a severed limb or missing organ.

Death Perception: Like all Valkyries, Brunnhilde can perceive and sense the coming of Death. She can see a "death-glow" surrounding a person who is in serious danger of dying, although most Asgardians and human beings cannot see the glow. A person surrounded by the death-glow might still be saved from dying until he or she meets his or her inevitable end at some later time under different circumstances.

Mystical Teleportation: Brunnhilde can transport herself and a dying or dead person from the Earth dimension to an other-dimensional realm of the dead, just by willing herself to do so. She can also return through an act of will.

Brunnhilde has had extensive training in unarmed combat swordplay, and horseback riding. Her natural fighting ability is unsurpassed among Asgardian women, and is perhaps equaled only by Sif.

Equipment: None known.
Transportation: Bifrost, Aragorn
Weapons: Brunnhilde employs two weapons: an unnamed iron spear and the enchanted sword, Dragonfang. An Oriental wizard named Kahji-Da was said to have carved the sword from the tusk of an extra-dimensional dragon.

Retrieved from "https://marvelcomicsfanon.fandom.com/wiki/Brunnhilde_(Earth-11425)?oldid=156534"
Community content is available under CC-BY-SA unless otherwise noted.