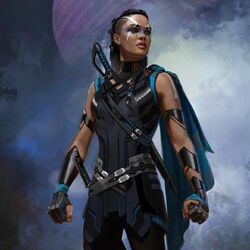 Make sure the ship has cupholders, we're gonna need a lot of drinks since, well, we're all going to die.

Brunnhilde is one of the fiercest warriors Asgard has ever seen. She was always amused by the brashness of Prince Thor, and enjoyed fighting alongside him whenever she got the chance.

She eventually rose up to become the leader of the Valkyrior, who would end up suffering heavy losses during the war against Odin's brother, the Serpent. Brunnhilde was the only surviving Valkyrie, and ended up helping her fellow survivors rebuild Asgard on Earth.

While the Asgardians tried to set up a small refuge outside New York, Brunnhilde adopted the mantle of Valkyrie and began working alongside the Avengers to fill the whole in her heart left by the other Valkyries. Working with the Avengers resurrected her self-purpose she felt whenever she used her abilities to save lives, and wanted to do whatever she could to live up to the former Valkyries.

Retrieved from "https://marvelcomicsfanon.fandom.com/wiki/Brunnhilde_(Earth-101)?oldid=250177"
Community content is available under CC-BY-SA unless otherwise noted.