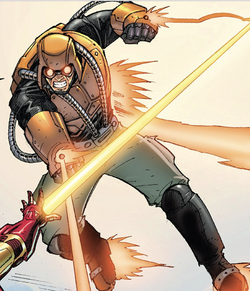 I will melt your face off! As soon as I recalibrate the formula to affect organic material!

Bruce Hogan was once a valued Stark Industries scientist working in the experimental tech division. He was even able to get his older brother, Happy, a job as Tony Stark’s personal body guard and chauffeur.

However, after his Melting Gun project was deemed unethical by the board, he was fired. Filled with anger, Bruce turned to the Advanced Idea Mechanics, who provided him with the unlimited resources he needed to complete the Gun. He then weaponized it and dubbed himself the Melter, agreeing to begin operating as one of AIM’s enforcers.

This gave him an opportunity to get revenge against Iron Man hands on, and was even successful in melting one of his suits of armor. However, his gun proved ineffective on Captain America’s Vibranium shield, which opened up for the Black Panther to take him out.

However, Bruce’s genius could not be contained. While locked up in the Raft, he was able to use the resources at his disposal to melt his cell wall and escape back to the Hive, just in time to pledge his loyalty to the new Scientist Supreme, Monica Rappaccini.

Retrieved from "https://marvelcomicsfanon.fandom.com/wiki/Bruce_Hogan_(Earth-101)?oldid=250669"
Community content is available under CC-BY-SA unless otherwise noted.