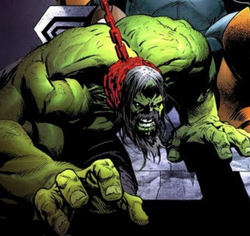 Earth-9999
Base Of Operations
Imprisoned in Ultron's Citadel
Characteristics
Gender

Bruce Banner accidentally mutated himself into the Hulk after trying to replicate the Super-Soldier Serum that created Captain America. After being hunted by the government for years, he was recruited by Nick Fury to join S.H.I.E.L.D. in the fight against Apocalypse.

However, after S.H.I.E.L.D. fell, the Hulk became enraged and went on a rampage against Apocalypse, who beat him into submission. After months of torture, Apocalypse began to domesticate the Hulk and essentially wipe out Banner's personality. For a time, he was used as an attack monster against Apocalypse's enemies.

After Ultron rose to power, the Hulk was sent to his Citadel to dismantle him. However, he was overpowered once more and imprisoned in a gamma cell within the Citadel. Ultron began experimenting on him in an attempt to replicate the mutation, and also to mock Apocalypse.

Years later, the Outsiders came to Earth-9999 and joined forces with the Avengers and the X-Men to raid Ultron's Citadel. Hulk was freed, and in the ensuing battle opted to sacrifice himself alongside Nick Fury and Magneto to destroy the Citadel, which essentially rendered Ultron powerless.

Retrieved from "https://marvelcomicsfanon.fandom.com/wiki/Bruce_Banner_(Earth-9999)?oldid=246158"
Community content is available under CC-BY-SA unless otherwise noted.