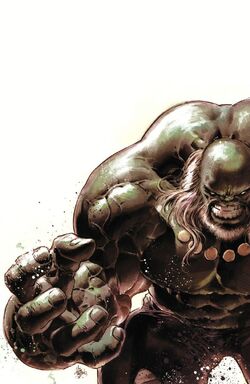 Earth-61616
Base Of Operations
Mobile across Earth: notably the New Gamma Base, Northwind Observatory; formerly mobile across the universe
Characteristics
Gender

Separated
Occupation
Scientist
Education
Ph. D. in Nuclear Physics and two other fields, California Institute of Technology (Cal tech)
Origin
Origin
Banner was mutated into a being with incredible strength after a failed attempt as a volunteer in the recreation experiment of the super-soldier serum using gamma radiation, as a part of US Army bio-tech force enhancement research program.
Place of Birth
Dayton, Ohio
First appearance
Modern Comics:
Dark Age Vol 1 1

I'm afraid that the Hulk is gone... Call me anything but that impaired, inferior, no-good green monster...

Before the years of Ultron Revolution, Bruce Banner seemed to have the same history with his Earth-61615 counterpart, until Ultron had started an all-out war against humans and those who dares to oppose him and his ideologies. As the incredible and seemingly indestructible Hulk, Banner joined the Avengers and other superheroes during the Battle of New York and assisted them in stopping Ultron and his millions of robotic armies across the globe.

Unfortunately, with all their best efforts and sacrifices, Ultron just became too powerful overtime due to his reoccurring self-upgrade, which no one could stop since Ultron's Sanctuary was so difficult to track down in order to find the megalomaniacal machine. As time went on, more and more casualties had started increasing throughout the years, taking the lives of several people, both superhuman or not.

The Fall of the Hulk

During one ensuing battle during Year 8 of the Ultron Revolution, General Thaddeus Ross, his daughter Betty and Bruce were "safely" being transported to the secret underground city found under New York through an advanced S.H.I.E.L.D. van, when suddenly, they were ambushed by Ultron Sentries in the streets of the Manhattan ruins. The vehicle violently crashed after dozens of Sentries shot at the van using their plasma cannons. In the wake of the crash, both Thaddeus and Bruce barely survived, but unfortunately, Betty didn't make it, succumbing from her injuries.

As she died in Bruce's arms, Bruce mourned, and as his emotions started settling out, he let out his extreme rage, turning into the Hulk once again, only this time, he had no intentions to revert back to Bruce. Ross had no other choice but to hold his daughter's lifeless body and watch the chaos and destruction the Hulk made, starting as he destroyed the incoming Ultron Sentries and Ultron-controlled Sentinels, which destroyed everything else in the surroundings, including buildings and other structures, in the process.

Lost in the Stars

Now accepting his fate, Ross closed his eyes and waited for his turn to go. But the rescue squadron of S.H.I.E.L.D. had arrived in time to save Ross and get him out of the open, successfully returning to the underground city with Betty's body. From that point on, no one, including Ross, had seen the Hulk or Bruce himself anywhere in New York or anywhere else in the entire country, leaving his whereabouts unknown. Following Ultron's continuous invasion on Earth, it was revealed that Hulk exiled himself out of guilt and loss for his failure to save the ones he love by leaving the Earth and flying into space through a Quinjet, encountering a wormhole which transported him to several alien planets across the cosmos, where the fiery and stressful environments of his visits had prevented him from regressing back into Banner, causing him to permanently remain in his Hulk form for the next few years in his newfound journey.

However, one such journey that he went through would change his life both as the Hulk and Banner forever, from the very moment he came across a dangerous region of space, located beyond the Andromeda Galaxy, an area mostly filled with insurmountable amounts of gamma radiation. This "gamma storm" unintentionally allowed him to merge his intelligence and consciousness and the Hulk's physical appearance and strength into one being, restoring Banner back to his self while retaining the body of the Hulk. Remembering the events of Ultron Revolution, Banner tried to return back to Earth in order to help his surviving allies against Ultron, despite already having lost his wife and other loved ones. Realizing that there was no way home, Banner could only despise his Hulk persona, who seemingly vanished after the intense gamma storm merged them together.

The multiversal events known as the incursions caused realities to crash with each other, with the central point being each universe's planet Earth, and one of those universes have pitted Earth-61616 against a distant future reality that unexpectedly unleashes an army of duplicated speedsters, led by none other than the future Speed Demon. During the cosmic assault, Maestro willingly assisted his allies and enemies alike in attempting to destroy the alternate Earth, in an attempt at stopping the great "speed storm" summoned by the chaotic speedsters, while the others launched several massive spaceships (built and previously owned by the deceased artificial intelligence Ultron) containing millions and millions of people as they try and evacuate the planet. In the end, the two realities collided, although Maestro was able to escape the death of his universe after accessing a jump point through his personal ship, evading the destruction caused by the final incursions.

Maestro eventually crash-landed in Battleworld in its early stages, when it was a frightening place full of darkness and constant conflicts. During this time, his newfound allies (which were other fellow survivors of the incursions) were mostly killed by overpowered Devil Hulks and Maestro and his remaining allies were about to be killed, when a mysterious woman by the named of Lady Miriam, introducing herself as a "merciful servant" to the Beyonders, rulers of Battleworld, came to give him refuge in the early days of the patchwork planet after saving him from the Devil Hulks. Maestro accepted her offer, leading for him to be appointed as a Baron of a domain known as Dystopia. Despite being a powerful ruler of his domain within Battleworld, Maestro wasn't grateful enough for what he had and still secretly plotted to unseat the Beyonders and take their place as the All-Father and ruler of Battleworld.

Maestro was eventually freed from his own illusion to help the Beyonders deal with a rising rebellion that was occurring in Battleworld, brief moments before the planet was destroyed, and led his people to join the heroic rebellion against the Great Mother and the Beyonders to restore their freedom. The destruction of Battleworld was the consequence of the rebellious cosmic triumvirate (Mister Fantastic, Beyonder, and Molecule Man) stealing the Beyonders' godly powers, but not before Doctor Doom made a sinister attempt to use it all for himself, but failed, and the Multiverse was rebuilt.

By the climactic finale of the battle on Battleworld, Maestro, along with other lost beings without a home reality to settle in, were subsequently thrown out to parts unknown in the now recreated multiverse. In Banner's case, he was transported to the prime reality, where he found himself in the middle of a gladiator match against ginormous creatures. At that moment, Maestro found the place a little too familiar, as if he had already been to that place before, before finally confirming that he was now on Sakaar, leaving him with no other choice but to smash his way to his escape and victory.

Gamma Radiation Physiology: Due to Bruce Banner being exposed to the Gamma Bomb's radiation and the later results arising from Banner's ensuing capacity to transform into a powerful monster, the Hulk is one of the physically strongest beings in the universe, with potential for limitless strength, and presumably stamina, durability, healing and adaptation. Getting his blood mutated and injected to the Super-Soldier Serum would also grant him to increase in size, causing his skin to slowly turn into grey and causes to increase his rage and his sometimes ravenous hunger even more, causing Banner to lose control of the Hulk. During the events of the Ultron Revolution's Year 8 as he exiles himself in space, the Hulk came across a gamma storm in deep space which fused Banner's genius-level intellect, knowledge, and consciousness with the Hulk's extraordinary superhuman abilities together to become an amalgamation of both Hulk and himself.

Same as a normal human being (as Bruce Banner).

Retrieved from "https://marvelcomicsfanon.fandom.com/wiki/Bruce_Banner_(Earth-61616)?oldid=252972"
Community content is available under CC-BY-SA unless otherwise noted.