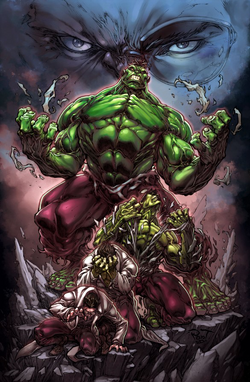 Robert Bruce Banner (born in the late 1970s) was the son of Dr. Brian Banner, an atomic physicist, and his wife Rebecca. Although Rebecca deeply loved Bruce, who returned her affection, Brian hated their child. An alcoholic, and a very, very angry man, Brian was driven by an insane jealousy of Bruce for being an object of Rebecca's love. Brian then abused Bruce and finally murdered Rebecca, then was placed in a mental hospital. After that, Bruce was raised by his aunt and mother's sister, Elaine Banner-Walters, who understood his great pain and rage over his childhood sufferings thanks to his crazed father after murdering her beloved sister, and raised him with love and care as if he were her own child, along with her own daughter Jennifer, Bruce's cousin and eventually his sister figure. Bruce grew up from then on as a highly withdrawn, intellectually gifted youth, in fact, a child prodigy.

Several years later, Bruce became a renowned scientist in the fields of Biochemistry, Nuclear Physics, and Gamma Radiation. He was recruited by the Bio-Tech Force Enhancement Project, becoming one of the scientists in the world who tried to recreate the Super-Soldier Serum which originated Captain America in World War II, but when an exposure to high levels of Gamma Radiation instead of Vita Radiation went awry, the mild-mannered scientist found himself plagued with a peculiar condition; when angered or provoked, he would transform into the rage-fueled and nearly mindless green-skinned monster known as the Hulk.

Fearful of the damage that Hulk could inflict, Banner would become a fugitive and something of a pariah, and even had chosen to live a discreet life in remote parts of the world, working to cure the sick and help the poor while trying to elude those who would take advantage of his ability to change into the enormous menaced green goliath mostly everyone seemed to fear and hate.

However, when General Thunderbolt Ross had sent a team of soldiers led by Emil Blonsky to apprehend Banner for their own intentions, he was then forced to return to New York City where he recruited the help of his lover Betty Ross and Samuel Sterns to cure him of his own curse. However, not long after this test was concluded, Blonsky himself had overdosed on Gamma Radiation and transformed into the Abomination, forcing Ross to allow Banner to turn into Hulk and battle him in the borough Harlem before then allowing Hulk to escape from their custody.

Banner wandered the world avoiding most population centers. In an apparently aimless journey, he came to be spotted via satellite recon photo in Canada and the Hulk sighted by locals along the North America who had mistaken him for a “Green Sasquatch." While traveling through the Dakotas and towards Idaho a few months after the first transformation, an encounter with some state troopers led to violence. An investigation into his former hideout, suggested that he was studying botany as well as that he was eventually heading to South America.

Despite being treated as a pariah by the authorities, Banner dedicated his life travelling across the world treating hunger, famine, and poverty-ridden countries, helping the sick and poor in the secretive way he could. However, when the Abomination was rejected by the Avengers Initiative due to his mental instability and diabolical behavior, Nick Fury, the current Director of the international peacekeeping agency S.H.I.E.L.D., recruited Betty Ross and agent Black Widow with the task to invite Bruce into the Avengers while he was in Calcutta, with Betty sincerely convincing to come home with her, albeit Bruce himself was still suspicious that for different reasons, something that the Initiative was hiding from him until he complies with their request. Missing Betty after once in a while, Bruce reluctantly agreed with Fury's deal, but remained skeptic that S.H.I.E.L.D. only needs his genius mind to help them deal with the threat of the Asgardian Loki. Despite almost causing a disaster when he was forcibly transformed into Hulk by Loki, Bruce was able to concentrate maintaining the Hulk's rage in time thanks to Betty's help, and join the Avengers during the Battle of New York against Loki and his Chitauri forces. Once the Avengers rested after the attempted invasion, Banner became reunited with Betty and had even befriended his new teammates after relocating at the Avengers Tower, free to live his life without any apprehension warranted after him.

At some time later before the starting points of the event known as Ultimate War during the Ultron Offensive, Bruce decided and tried to make a specialized serum out of the original Super-Soldier Serum. This Hulk was much stronger than the original, based on Banner's test results, experimenting it on plants and a few lab rodents. He later injected the serum on himself, and was still able to keep the effects of the new serum.

All of Banner's success working on this serum however, would be changed, due to Ultron's return for ultimate vengeance. After being confronted by his old foe, Ultron repeatedly had beaten Bruce into a pulp, taunted him with several false testimonies about him not being accepted by his loved ones, including Betty herself. Ultron then continuously traumatized him after the sinister machine had killed some of his associates inside his laboratory before locking him inside his own specialized cell. As Ultron leaves him in there, all of those traumatizing and stressful events, eventually made him hit his breaking point and turned him into the Hulk.

He was tried to be confronted by closest allies and even tried to calm him down as the Hulk, but he took on all of the newly-established Ultimates, leading into a chaotic and destructive battle between the Green Goliath and the "Earth's Mightiest Heroes," as they try to calm the "Big Guy" down. This Hulk's skin color's was more gray compared to his original form which was green, and somehow it gets darker and darker as he gets angrier. This version of the Goliath was more like Banner's inner emotions let out, and being over-protective of Betty. The so-called Gray Hulk, was finally reverted to Banner by the heroes, especially Wasp and Hank Pym when they used an antidote to sting a part of his brain, rendering him back into an unconscious state.

After Ultron's apparent defeat and disappearance, Bruce was held in a special cell and had to take medication frequently courtesy of S.H.I.E.L.D., but was then later freed by the orders of Fury due to his immediate improvement, after discovering that he was both indeed manipulated, by Ultron himself. Although free, he was advised by Fury to not stay inside the states any longer, for he became a fugitive by the authorities once again, even more wanted than once before due to his previous actions. Bruce then took the advice of Fury, and was later automatically booked for a flight to Iceland a month later, using S.H.I.E.L.D.'s simulated identity documents and data, to avoid Bruce from getting caught.

Unfortunately, his trip into safety and "vacation" was also been cut shortly, after the starting events that would lead to Ultimate War. Those events included the bombing of several airports in various countries around the world, cancelling Banner's flight. Bruce later returned back to the Triskelion to question Fury about the series of unfortunate events. Banner later turned into the heroically-improved Hulk, gaining full control of him once again and helped in the fight alongside the Ultimates and the entire world's heroes against the forces lead by Hydra after the return of Red Skull into present day, Mister Sinister's own faction of the Brotherhood of Supremacy, the international terrorists known as Liberators, A.I.M., and several more forces of "The Alliance" whose goal is world revolution and complete domination.

Gamma Radiation Physiology: Due to Bruce Banner being exposed to the Gamma Bomb's radiation and the later results arising from Banner's ensuing capacity to transform into a powerful monster, the Hulk is one of the physically strongest beings in the universe, with potential for limitless strength, and presumably stamina, durability, healing and adaptation. Getting his blood mutated and injected to the Super-Soldier Serum would also grant him to increase in size, causing his skin to slowly turn into grey and causes to increase his rage and his sometimes ravenous hunger even more, causing Banner to lose control of the Hulk. The process by which Banner usually transforms into the Hulk is presumably the result of the chemical catalyst, adrenaline (a.k.a. epinephrine). As in normal human beings, Banner's adrenal medulla secretes large amounts of adrenaline in time of fear, rage, or stress, which hormonally stimulates the heart rate, increases blood-sugar levels, and inhibits sensations of fatigue.

Same as a normal human being (as Bruce Banner).

Retrieved from "https://marvelcomicsfanon.fandom.com/wiki/Bruce_Banner_(Earth-61615)?oldid=269047"
Community content is available under CC-BY-SA unless otherwise noted.