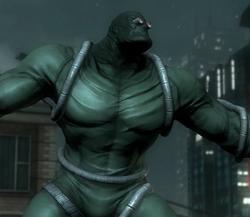 Doctor Bruce Banner was changed forever after a disastrous experiment. The gamma radiation in the experiment turned him into the Hulk, a beast that he would only become when he was truly angry.

Banner seeking help, unable to control his anger, was taken by the government as they had claimed they knew how to help him.

He realized that he was being used as a test subject for the military and decided to stop working for the government. The government did not want Banner to leave, so they threatened him that if he left, his family would be taken away from him.

Bruce Banner begrudgingly decided to stay in the government for his family's sake and fight as a military weapon until he was soon invited to fight with the Avengers. Ever since then, he has been a loyal and founding member.

He uses his Hulk form as a weapon with super-human strength and the ability to leap to great heights.

Under construction. Do not edit, write or touch.

Retrieved from "https://marvelcomicsfanon.fandom.com/wiki/Bruce_Banner_(Earth-5919)?oldid=242260"
Community content is available under CC-BY-SA unless otherwise noted.