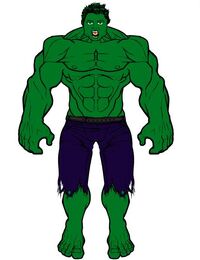 Bruce was the son of Brian and Rebecca Banner. His father was a scientist who was working on a project meant to strengthen the human body's resistance to both damage and disease along similar lines to the Super Soldier Serum that created Captain America but was lost with the death of its creator Abraham Erskine. Supervising the project was up-and-coming military officer Thaddeus Ross. When Brian thought he had made a breakthrough he put forward a request for human trials that got denied by Ross leading to Brian deciding to test it on himself but to little effect. Believing that his immune system had simply destroyed the agent. He wound up unwittingly passing it on to his son Bruce, and his daughter Jennifer through an affair with his wife's sister. Due to the apparent rut his work was in his funding would get cut and feeling disgraced by that decision Brian walked away from the military altogether but struggled to find works elsewhere. He became abusive towards his family and was eventually pushed out by Rebecca with the support of her family when they'd realized they had enough of his treatment. Once again Brian felt disgraced by the idea of he the "head of the household" being ousted by the family, but ultimately wound up leaving anyway. However Brian's abuse would leave a lasting impression on Bruce who would try to bottle up all the anger and resent associated with it after he once took it out on a bully at school. Lashing at anyone he could because of the fear he held of his father.

Bruce wound up growing-up into becoming a scientists like his father. He wound up working for the Stark Industries Weapons Division that was working on a new age nuclear weapon powered by gamma radiation. He worked on the project and eventually started having a romantic relationship with Betty Ross, the daughter of his father's old associate leading them to get to know each-other as well. Ross was leery of him because of what became of his father, but also because he felt he was to spineless to deserve his daughter. Not knowing the reasons why he was so timid and averse to conflict.

Working at the plant was also Samuel Sterns, a menial worker and assistant under Bruce who'd do a lot of the grunt work but was also seen as a friend by him. Another was a security guard named Gil Roth. Roth being an alias for a Russian terrorist named Emil Blonsky working for the Crimson Dynamo. A group of radicals claiming to remain loyal to the defunct U.S.S.R. Hoping to humiliate Stark Industries, to turn public opinion on them as well as the weapon, to deter military approval of the project, and to cover up the theft of the research he is tasked on bringing back so his group can use and replicate the technology for their own devices he seeks to set off the gamma bomb in the facility. During the time he goes to set up the explosion however Sterns is rolling in some containers of waste material. Spotting Blonsky he questions what he is doing, leading to him receiving a grievous gash to the head and be left to die as Blonsky tries to make his escape.

Sterns though injured managed to sound an alarm, leading to an evacuation of the building. As crews are being taken out in trucks, Blonsky getting out on one of them Bruce gets out of his own when he realizes that Sam is missing. He runs back into the facility after learning that the alarm had been triggered in the room storing the bomb, tipping him off as to that being where Sam was. He found him, and helped carry him out of the room. Bruce eventually spotted a jeep where he laid Sam and took the wheel. Making a mad dash to get away from the impending explosion. However, they aren't able to do it in time as when the bomb is triggered they are caught on the fringes of the blast. Blowing the jeep off the ground and bombarding the two in gamma rays. The two would find themselves hideously transformed. Both getting green skin. But whilst Sam's cranium expanded, Bruce turned into a gigantic hulking monster. Whilst at first in a state of rage and confusion, smashing up some rocks in the area he'd eventually turn and see the out-cold Sam. Feeling pity for him the Hulk picks him and takes him across the desert 'til he reaches the encampment where the facility's workers had rendezvoused after the evacuation he had been told about as Bruce before going back to rescue Sterns.

People were horrified to see him, and in spite of his good intents winds up getting shot out. Though the bullets did nothing to him, it still angered the Hulk who put Sterns down to be left in their care before escaping off into the desert. Betty witnessed this and was the first to run up to see if the man was alright, the rest keeping their distance and discussing what they should do given his bizarre appearance. She finds out that he is alive and calls for medical assistance to help.

Bruce never learned about his father's experiments or that he unwittingly passed down his would be super soldier formula to him. Rather than being destroyed it merely lied dormant and would be awakened by the gamma radiation. And that serum would also be what made his "gamma form" something his body could change in and out of rather than remain permanent like Sterns'.

Retrieved from "https://marvelcomicsfanon.fandom.com/wiki/Bruce_Banner_(Earth-515)?oldid=156459"
Community content is available under CC-BY-SA unless otherwise noted.