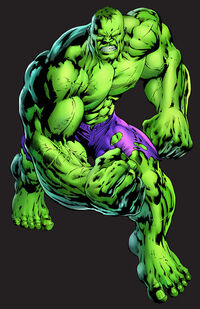 Single
Occupation
Scientist
Education
Several doctorate degrees
Origin
Origin
After injecting himself with Dr. Erskine's formula, Bruce was sabotaged and exposed to Gamma rays instead of Vita-Rays that turned Captain America into a Super-Soldier. The Gamma rays mutated Bruce's cells to a huge degree where he developed green skin and became a different type of Super-Soldier.
Creators

There's a thin line between good and bad. I walk that line every single day and when I stray from it. People die. My name is Bruce Banner and I'm the Hulk

Bruce Banner was the son of atomic scientist specializing in Gamma radiation, Brian Baner and his wife Rebecca Banner. Bruce's parents were killed at a Gamma base test sight when they were attempting to test an gamma bomb. After the death of his parents Bruce was adopted by his aunt and cousin.

When Bruce turned 18, he and his cousin Jennifer Walters moved to Culver University, where Bruce studied, science and genetics while Jennifer studied law. Bruce was a frequent rival of the young Emil Blonsky who was a College sophomore and had more respect than Banner although, Bruce was smarter. Bruce graduated in 2012 with Suma Cum Lade. S.H.I.E.L.D knew of Banner's father's history and saw that Bruce was very smart and so the current S.H.I.E.L.D director offered Banner a place at S.H.I.E.L.D, Bruce accepted. A few months after joining S.H.I.E.L.D, Bruce met the young Betty Ross, after a few dates the two began a relationship together.

Bruce was assigned to replicate the Super-Soldier serum, the S.H.I.E.L.D Director Igor Drenklov. Bruce had spent a year trying to replicate Erskine's serum, in 2013 he finally felt he had accomplished his goal with a little of Captain America's frozen blood sample, Bruce used this and injected it into himself. Bruce then realized he was enable to test it on himself due to Vita-Rays no longer being in existence, Drenklov told Bruce that he had played his part and wanted Bruce to start working on radiation resistance.

One day while working in the resistance department, an alarm went off stating there was a malfunction in the lab and the gamma bomb was set to detonate in 1 minute, Bruce tried to overwrite the systems but there was no time so he decided to expose himself to the gamma rays in order to deflect the bomb.

Bruce then suddenly started to mutate, he bulked up with his skin going green, he grew in height and became a raging monster.

Birth of the Hulk

The monster, dubbed as the "Hulk" was attacked by S.H.I.E.L.D agents, Hulk disposed of them with ease. Hulk was not looking to fight, he was looking for freedom. Hulk took out many agents trying to stop him, Hulk eventually jumped through the roof of the Triskelion and saw the sun and leaped away.

A now reverted Bruce Banner wakes up somewhere in the icy-cold season of Canada. S.H.I.E.L.D retrieved Bruce and took him back to the Triskelion and examined him, they saw that Gamma mutated Bruce's Super-Soldier cells similar, albeit different, effect to Steven Rogers' Vita-Rays exposure.

While recovering, Bruce began to grow suspicious of Director Drenkalov as he had become more secretive after Bruce's accident. One day, Bruce decided to sneak into Drenkalov's office, Bruce discovered that Drenkalov was a sleeper agent for A.I.M and Bruce's "accident" wasn't actually an accident at all, Drenkalov sabotaged Banner and forced him to expose himself to Gamma rays, and after the accident Drenkalov and other sleeper agents harness Banner's blood and turn it into a weapon.

Bruce then confronted Drenkalov, Bruce and Drenkalov then engaged in a fist fight. Drenkalov brutally beat Bruce and claimed Bruce was a traitor, enraged by the false lies and his high adrenaline from the fight, Bruce proceeded to mutate into the Hulk once again. Drenkalov fled while S.H.I.E.L.D agents attempted to stop him, Hulk defeated the agents and proceeded to follow Drenkalov, Drenkalov was in a suit of armor provided to him by Tony Stark. The Hulk and Drenkalov fought, the Hulk brutally smashed Drenkalov into the ground killing him and then destroyed all of Hulk's blood samples in the S.H.I.E.L.D medical bay and fled.

The Hulk arrived somewhere in the Badlands and reverted back to Bruce Banner. Bruce then "borrowed" some clothing off a washing line and went to a cafe due to his immense hunger (Transformations into the Hulk cause Bruce to become hungry), after Bruce had arrived at the cafe he saw on the TV that S.H.I.E.L.D and the U.S government had initiated a search to arrest Bruce Banner. Bruce immediately left the cafe and realized he was now on his own.

Dr. Bruce Banner is the 3rd smartest man in the world, falling behind Tony Stark and Reed Richards, Bruce Banner possesses a mind so brilliant that it cannot be measured by any known intelligence test. When Banner is the Hulk, the Banner's consciousness is buried within the Hulk's, and can influence the Hulk's behavior only to a very limited extent. However, recent facts indicate that Banner subconsciously restrains Hulk's full power.

Class 150+; the Hulk is one of the physically strongest beings in the entire Ultra Marvel Universe. The Hulk possesses vast superhuman strength enabling him to lift (press) far in excess of 150 tons easily. In human form Bruce Banner possesses the normal human strength of a man of his age, height, and build who doesn't engage in regular exercise. When the Hulk gets enraged his strength increases exponentially. The Hulk has no strength limit, his strength varies from 150 tons to practically unlimited levels. His incredible strength has caused the downfall of supervillains and other superheroes who misunderstood him.

Retrieved from "https://marvelcomicsfanon.fandom.com/wiki/Bruce_Banner_(Earth-3998)?oldid=200097"
Community content is available under CC-BY-SA unless otherwise noted.