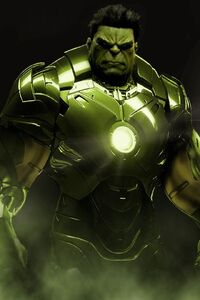 The Hulk is a lie, Midas is the truth, my whole life was a lie.

-- Bruce upon realizing his heritage

Bruce was born on Titan to A'Lars and Sui-San, but he was stolen by a Celestial and thrown to Earth. Bruce had a really bad childhood because his adoptive father was a mentally unstable and abusive alcoholic. When he grew up, he became a scientist, and an experiment involving a gamma bomb turned him to his true form. At first it was only when he was angry, but then he somehow stayed in it permanently, and he joined but later left the Avengers.

he soon found out from his brother Thanos, an intergalactic peacekeeper, that all was not as it seemed. Hulk then found out about his real heritage and he was enraged. Slaughtering loads of Avengers, he became the ruler of Titan.

A few years later, Thor, Hercules, Dormammu, Thanos, Storm, and the Collector came to Titan to negotiate a deal between the Eternals (to be represented by Bruce, now known as Midas), Humans (unrepresented), Asgardians, Olympians, Skrull, Shi'ar, Kree, Sakaarans, respectively. They soon formed the Ruler Regard, an organization focusing on keeping the galaxy safe.

Captain America started a revolution, along with She-Hulk, Wolverine, Stranger and Gladiator, against the Ruler Regard, with Skaar dying in the process at Captain America's hand, resulting in Midas trying to destroy the Earth because of his son's death.

Midas then left the universe for another one, telling the Ruler Regard to call him over to be back in that universe, if he was needed, via an interdimensional phone. He felt the universe that he lived in would suffer from his permanent presence.

Return and Resurrection Of Skaar

He then returned to the universe, retrieved the Collector's soul from Lord Wolverine, which resurrected him, and Midas, believing to have redeemed himself, rejoined the Ruler Regard alongside the newly revived Skaar.

Confrontation with his father

Ted then confronted Midas, saying that The Ruler Regard, Midas then angrily said that if A'Lars had stopped the Celestial from kidnapping him, he might not be like this so A'Lars was punched back to earth by Midas.

Bruce was then captured by Skaar and the Stormhunters, who secretly wanted to release their leader, The Damaged One from Underspace, so he could destroy Midas, Antonio hears of Bruce being captured causing Antonio to call Chief Multiverse, Bruce is eventually saved but not before the Stormhunters can free the Damaged One.

Bruce announces that he is having an affair with Susan Storm-Cage which angers Sue's husband Luke (aka the Unbreakable Cage) and her exes, Victor Von Doom and Nathaniel Essex.

Retrieved from "https://marvelcomicsfanon.fandom.com/wiki/Bruce_Banner_(Earth-37U)?oldid=262176"
Community content is available under CC-BY-SA unless otherwise noted.