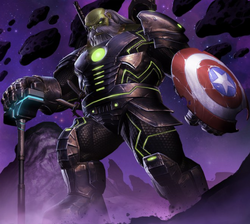 The Cult of the Maestro
Universe

Bruce Banner accidentally mutated himself into the Hulk after he tried to recreate the Super-Soldier Serum. Despite spending years on the run from the military, the Hulk ultimately became hailed as a hero after joining the Avengers.

However, after the Siege of Midgard, the Hulk was left wandering the ruins of America by himself. This isolation led to him evolving into the Maestro, effectively eliminating Bruce Banner's personality while maintaining his intellect. Using his new edge, the Maestro was able to track down remaining humans and set up a small civilization in the remains of Citrusville, where the Man-Thing once resided.

Retrieved from "https://marvelcomicsfanon.fandom.com/wiki/Bruce_Banner_(Earth-2001)?oldid=260962"
Community content is available under CC-BY-SA unless otherwise noted.