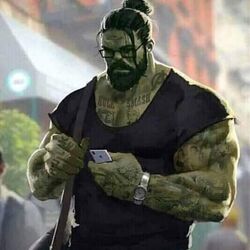 Please don't say "Smash". I don't do that anymore.

Bruce Banner is one of the smartest men on the planet. He once worked for Potts International alongside Tony Stark in developing the Terrigen formula. After it was completed, while Stark was fired, Banner tested positive for Inhuman DNA. He was put through Terrigenesis and emerged a green, hulking goliath. He was dubbed "The Hulk" and made a member of the Squadron Supreme.

For a time, Bruce tried to use this platform to do good, but it quickly became too much for him to be working alongside such horrible people. After trying to quit, he ended up locked in battle against Iron Man, which ended up claiming the lives of several civilians. Potts International spun it so that the public believed Hulk went insane, and was now a pariah.

He went into hiding, and eventually began a new life in the island of Genosha, which was just off the coast of Europe. Bruce would settle into the peaceful role of a librarian, and even formed a club called "The Society" alongside Stephen Strahan and Simon Williams, who are both former member of the Squadron with similar stories.

Banner would later encounter Nick Fury, who lost in wife and son in Hulk's battle with Iron Man. Feeling guilty and wishing to make amends, Banner offered his help to the Avengers, which Fury refused. Even still, Bruce was inspired by their fight and began forming a plan to help them by outing Potts to the world.

Retrieved from "https://marvelcomicsfanon.fandom.com/wiki/Bruce_Banner_(Earth-1515)?oldid=244473"
Community content is available under CC-BY-SA unless otherwise noted.