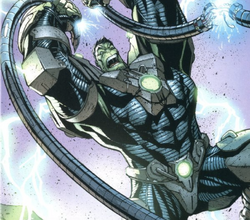 Is it too much to ask that I be the strongest and smartest there is?

Bruce Banner was abused by his father as he was growing up for being smart. When his mother tried to protect him, she ended up getting beat to death. After his father was arrested, Bruce was sent to live with his Aunt Elaine, and her daughter, Jennifer.

Elaine didn't know how to properly nourish Bruce's intelligence, which resulted in him feeling like an outcast even from his own family. However, he was able to put them behind him when he was accepted into a prestigious college where he threw himself into his work.

He would eventually be selected to work for a government project that was dedicated to recreating the Super-Soldier Serum that created Captain America. It was on this project that Bruce met and fell in love with fellow scientist Betty Ross, whose father, General Thaddeus Ross, oversaw the project. He was also not super fond of Bruce.

Eventually, Bruce and Betty conducted the theory that the missing ingredient for the Serum was Gamma Radiation. However, just before they were able to go into the testing phase, the government cut their funding and General Ross fired Bruce. Unwilling to let a miracle go when he was so close to uncovering it, Bruce tests the Serum on himself. But it did not yield the results he was hoping for.

Bruce was mutated into a large green monster that called itself the Hulk and was filled with rage. General Ross immediately ordered the army to capture the Hulk by any means necessary, but whatever they threw at him proved ineffective. Eventually, after escaping, Hulk calmed down enough to transform back to Banner, who determined that his only option was to go on the run in order to protect Betty, and all the other innocent people.

Over time, Bruce tried to find some common ground with the Hulk, who really did only want to be left alone, and often found himself helping people in trouble. Despite still being somewhat of a loose cannon, Bruce and Hulk were eventually recruited by Nick Fury to join the Avengers Initiative when the Earth was being invaded by aliens.

The Avengers took Bruce in and gave him a home. He became close friends with Iron Man, who was one of the only people who didn't treat him with kid gloves out of fear of the Hulk. After the team left S.H.I.E.L.D. to operate on their own, they even ended up hiring Bruce's estranged cousin, Jennifer, as their personal lawyer, which gave them a chance to reconnect.

After serving with the team for years and having access to advanced technology, he was able to further experiment on himself to merge his own mind with the Hulk's, maintaining his intelligence and the Hulk's personality.

Retrieved from "https://marvelcomicsfanon.fandom.com/wiki/Bruce_Banner_(Earth-101)?oldid=250726"
Community content is available under CC-BY-SA unless otherwise noted.