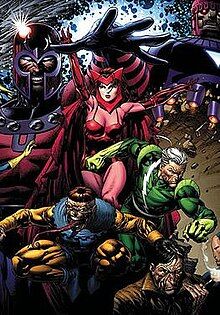 As part of his crusade against humanity, who he believed would never accept mutants and let them live in peace, Magneto brought together a group of like-minded mutants, including his own children Quicksilver and Scarlet Witch, to take the fight to the human population and take their rightful place in society. Magneto's Brotherhood frequently come into conflict with the X-Men, led by Magneto's former friend Charles Xavier.

After the creation of Project Wideawake, the Brotherhood began attacking Sentinel facilities. After attacking one of these facilities, the Brotherhood discovered that the mutants captured by the Sentinels were being experimented on by Bolivar Trask, the creator of the Sentinels. Magneto revealed this to the world and brutally killed Trask in the same broadcast, promising that this was the final straw and that mutantkind would finally take their rightful place as the rulers of home sapiens. The Brotherhood were stopped in their attack by the X-Men and, left with no choice due to Magneto's furious and relentless rampage, Charles Xavier used his powers to shut off much of Magneto's mind, leaving him catatonic. In the aftermath of this battle, Cyclops defected to the Brotherhood, while Scarlet Witch and Quicksilver left the group.

Cyclops became the new leader of the Brotherhood and turned them into more of a proactive group targeting anti-Mutant companies and politicians, bringing them into conflict with the X-Men. One such incident, in which the X-Men prevented the Brotherhood from destroying a laboratory seeking a Mutant cure, saw the tension between Cyclops and Havok explode and the two came to physical blows, a fight that saw Cyclops blast his brother out of a window, truly severing the bond between them. This same incident brought Cyclops face to face with Xavier. Cyclops denounced Xavier's dream of human-mutant harmony as delusional, blaming humanity for being unable to accept Mutants and saying they never would.

As part of William Stryker's crusade against mutants, Vanisher, who had been forced to work for Stryker's Purifiers, and Mystique, whose wife Destiny was murdered by Stryker, joined the group. The Brotherhood and the X-Men worked together to fight against Stryker's plans to use Xavier's powers to wipe out all mutants but part on bad terms after Cyclops allowed Mystique to kill Stryker in retaliation for the death of Destiny.

When Apocalypse rose and sought to bring about several catastrophic events to test Mutants and humans ability to survive the Brotherhood initially considered allowing this to happen, figuring Mutants will easily survive. Cyclops however convinced them that Apocalypse's actions would kill thousands of Mutants and that despite their differing viewpoints they had to work with the X-Men to stop the ancient mutant. The battle with Apocalypse was brutal, with Cyclops tragically watching his brother die at the hands of Apocalypse. The return of Magneto turned the tide, and the X-Men and the Brotherhood successfully turned back the threat of Apocalypse thanks to the combined efforts of Cyclops and Jean Grey. In the aftermath Cyclops, devastated by the death of his brother, abandoned the group. The remaining members of the Brotherhood would turn to Magneto but he too would leave them, disappointed that they had previously abandoned him to follow "a child".

Toad, Blob and Vanisher continued to work together, though their attempts at robbing a bank were quickly foiled by the X-Men. They later relocated to Magneto's new mutant nation, Genosha.

Retrieved from "https://marvelcomicsfanon.fandom.com/wiki/Brotherhood_of_Mutants_(Earth-762)?oldid=271062"
Community content is available under CC-BY-SA unless otherwise noted.