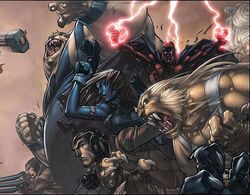 After the death of Sebastian Shaw during the Cuban Missile Crisis, Magneto forms the Brotherhood of Mutants with the broken remnants of Shaw's Hellfire Club. Xavier tries to confront Erik within the island of Genosha, where the home and the headquarters of the Brotherhood takes place, and manages to convince and fled with a handful of followers to abandon Erik's Brotherhood, but Magneto decided to teach him and the other followers a lesson and broke his spine, leaving him crippled.

Soon after Xavier's escape, Magneto led his established Brotherhood in an anti-human campaign of political assassinations and terrorist bombings. A few years later, Magneto and the Brotherhood moved to a remote island in the Pacific known as Genosha, to avoid high profile from the public and build their own civilization as Mutant Supremacists, believing to live past the fall of humankind. Erik even devised a new language to his followers, and through his technical intelligence, he started his own kingdom he named, "The Citadel."

After the defeat of Trask and the Sentinels, the Brotherhood and the X-Men remained arch-enemies again, as usual. It was later revealed that most of the unused Sentinels were stolen and reprogrammed by Magneto and the Brotherhood and was used as the guardians of the gates of his citadel, at the island of Genosha.

Realizing that he had no chance against the X-Men alone, a liberal-minded but extraordinary mutate known as Mister Sinister eventually allied himself with Magneto and joined his Brotherhood, pretending and introducing himself as a believer in mutant supremacy as well as being an anti-human, believing that mutants should and will always be the top of the food chain, though in reality he joined so they could help him gain the upper hand in defeating the X-Men and as well as studying and manipulating their mutant (including the Brotherhood) powers and abilities and also getting each of their DNA so he can conduct an experiment by genetically alter himself once again, so he can be more powerful than he was before.

He was so manipulative overtime that he even manages to earn the trust of Magneto and the rest of the Brotherhood) except for Magneto's closest loyalists, who already had a secret suspicion against him), causing for him to become his right-hand man when they are in a war against fellow mutants, such as the X-Men or humans, such as the Avengers and the Fantastic Four.

As a high ranking-member of the Brotherhood, Mister Sinister surprisingly conducted a few terrorist attacks by taking down several organizations with the help of his hybrid enhanced sleeper agents that he created in his lab using the genetic samples of the mutants and mutates he once collected from. From time to time, Sinister had the desire of gaining power and control over all living organisms on the planet, since he desirably wanted to harness and manipulate the evolution of life in this planet.

Divided by The Movement

As time progresses, Sinister began observing and studying every tragic and disastrous events in the world, and thus he realized that the state of modern civilization is worsening from time to time due to the existence of enhanced individuals such as the mutants and mutates, realizing that sooner or later, the community that relies on super-powered individuals would eventually collapse. Due to this, he plans on creating a massive revolutionary war that would be much worse than any other war in the history of the world, so much worse it could create a new movement throughout the civilization as we know it, where the world will be ruled by terrorists, following an established new world order.

Later on, the Brotherhood of Mutants, led by Mister Sinister (under the guise of their true leader, Magneto) has caused wreak and havoc across the anti-mutant country of Sokovia's capital city, Novi Grad, which immediately have gotten the attention of the X-Men. The heroic mutants then clashed against the mutant terrorists, resulting with their defeat and escape back to the sacred island of Genosha, where Magneto attempted to banish Sinister out of the Brotherhood due to his actions.

After revealing his true plans to Magneto and his intentions to the Brotherhood such as the threatening Magneto of eradicating mutantkind and allying himself with several organizations Magneto has despised of, including the Nazi-based Hydra which Magneto had been despising off since his childhood. As a result, Magneto demands Sinister to leave his team, though during his time as a member he manages to earn the trust of several mutants, gaining allies inside the Brotherhood and those members include three of Magneto's loyalists, Multiple Man, Mastermind, and Hard-Drive, while the rest of the traitors had been brainwashed by the villain, leaving only few members who still stood by Magneto's side, his loyalists.

However, it was finally revealed that Sinister had gained a few several allies where some of them where brainwashed and some weren't. Sinister and Magneto clashed in order to win who was worthy of becoming the leader of the Brotherhood, only to realize that the Brotherhood was broken into two factions, both Sinister's and Magneto's. At the end of Ultimate War, Magneto and his Brotherhood faction later allied themselves with the Ultimates and the rest of the heroes to end Sinister's reign of chaos, along with the rest of the Movement Alliance.

Due to Sinister's betrayal, the Brotherhood momentarily but devastatingly breaks into two factions, Magneto's and Sinister's side. Alongside Juggernaut, Mystique, Sabretooth, Blob and the remaining members of Magneto's side, Magneto and his faction later allied themselves with the Ultimates and the rest of the heroes to end Sinister's reign of chaos. But despite their victory in helping the defeat of Sinister, the Brotherhood never manage to reform its state on Genosha, causing for them to have a momentary hiatus and split apart throughout the rest of different parts of the world, remaining to be hidden from the authorities, who began their search on mutant terrorists after the events of the war.

As a consequent result, Magneto and his closest allies had a rough trying to recover into reforming the entire Brotherhood back together, before he was still able to get most of them all back together later on, now that most of the entire world has seen them as highly-threatening fugitives and extreme mutant terrorists, and all of it wouldn't have been possible without Mister Sinister temporarily taking over the Brotherhood in the very first place.

Retrieved from "https://marvelcomicsfanon.fandom.com/wiki/Brotherhood_of_Mutants_(Earth-61615)?oldid=265276"
Community content is available under CC-BY-SA unless otherwise noted.