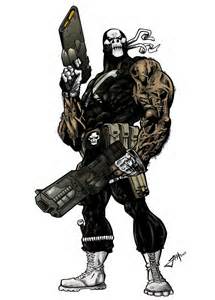 Little is known about Crossbones' life before his incarceration in the Vault. It can be assumed to be similar to his mainstream counterpart.

Crossbones was among the supervillains imprisoned in the Vault. He was freed when the War Machine Skrull attacked said prison, and attempted to break out along with fellow inmates Whirlwind, the Klaw, the Iron Cross, and Grim Reaper.

Crossbones is one of the world's best hand-to-hand combatants, with extensive training in street-fighting, military combat, and various forms of martial arts, He has trained extensively with the Taskmaster to the point where he was actually made an instructor at the Taskmaster's school for criminals. Crossbones is also a superior marksman with guns, crossbows, and throwing knives. He also has some experience with torture and brainwashing, having nearly so with Diamondback. He is also an expert pilot.

That of a normal human.

Equipment: Carries various communications devices, one of which is mounted in one of his gauntlets.
Transportation: None known.
Weapons: His weaponry includes various firearms, a collapsible crossbow, a wrist spike, spring-loaded stiletto blades in his gauntlets, various explosives and poisoned knives.

Crossbones is often said to be a psychopath.

Retrieved from "https://marvelcomicsfanon.fandom.com/wiki/Brock_Rumlow_(Earth-6109.2)?oldid=201588"
Community content is available under CC-BY-SA unless otherwise noted.