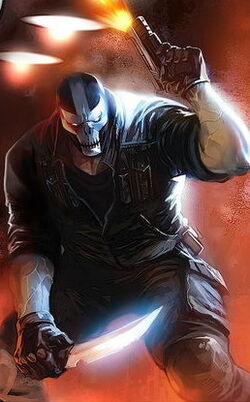 For me, working for HYDRA was gritty. I couldn't express my own anger and my thirst for vengeance. With HYDRA, they help me to channel my expressions, through killing innocent people, rampaging, and other things I'd love. All of them are related to total chaos.

The Soldier of Honor

Born in Cleveland, Ohio, much of Brock's past was unknown. However, he was known to be born from a militaristic family, who nearly got their entire lives filled with war-participation. His father was said to have participated in the Gulf War, and his grandfather once fought in World War II and the Vietnam War. As such, Brock followed his family's footsteps, becoming a soldier. He also claimed that he's a member of a certain paramilitary agency. Other than that, nothing was known about Brock.

At one point, one of Brock's mission went wild. His entire squad was wiped out by opposing forces (although that time, Brock forgot the place where the mission took place in), and Brock went mad. He proceeded to go "berserk", killed the oppositions, before actually continuing his rampage to a nearby village. He was stopped forcefully, when a back-up team was sent after him and shot his legs twice with an M60. This knocked out Brock, but he still survived. After he woke up, he was given a sign of discharge, and was cast-out of the military. Angered, Brock went back home and did a "little rampage".

Days later, a man approached Brock, and offered him to work in his "agency", which was later known as HYDRA. Brock quickly accepted the offer, after the man explained him about HYDRA. Brock thought that it'd be a good opportunity to "set the world on the flames of vengeance". In a matter of months, Brock became one of the greatest HYDRA agents of all time. As a reward, he was given physical enhancements that enhanced his physical performance, becoming a half-Super-Soldier.

At one point, HYDRA planned to infiltrate their rival organization, HATE, to destroy them from the inside. With this, HYDRA sent Brock to infiltrate them, by becoming a HATE agent. While the name "Brock Rumlow" was known in the past, HYDRA managed to delete Brock's past "rampage" data, which allowed him to become a HATE agent with ease. Dirk Anger himself didn't know who Brock was. Brock also became a member of Dirk's Avengers, becoming one of the early members of the organization. As Brock remained in HATE, HYDRA's plans began to succeed. Brock participated in the Avengers' mission to recruit the Juggernaut, nearly costing his own life. After that, HYDRA's plan to assault UNN "Gamma" happened, and it was a success due to Brock's effort.

Artificially Enhanced Physiology: Brock's physical attributes were enhanced by HYDRA through a series of experiments. The experiments bestow Brock with physical attributes similar to those of the US Agent's, but weaker. However, he has been said to be as strong as US Agent himself because Brock's a stronger person than Frank before being experimented upon. The experiments improved Brock's already-impressive physical condition. His pain tolerance was also enhanced. Before being enhanced, Brock miraculously survived being shot by two M60 rounds to the legs, only to be knocked out.

Brock's a master combatant, marksman, and assassin, as well as his claims to be proficient in hacking computers.

Retrieved from "https://marvelcomicsfanon.fandom.com/wiki/Brock_Rumlow_(Earth-4045)?oldid=234956"
Community content is available under CC-BY-SA unless otherwise noted.