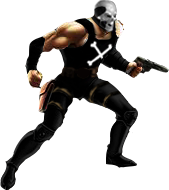 First appearance
S.H.I.E.L.D.ed
(as Brock Rumlow)
Death in the Family
(as Crossbones)

Brock Rumlow was a S.H.I.E.L.D. agent and leader of the S.T.R.I.K.E. team. Secretly, Agent Rumlow and his team were among the Hydra cell embedded in S.H.I.E.L.D. after the organization recruited Arnim Zola as part of Project Paperclip. S.T.R.I.K.E. often worked alongside fellow S.H.I.E.L.D. agents Captain America and Black Widow. One of their missions consisted in retrieving the allegedly destroyed Zodiac virus from a group of terrorists led by Baker who planned to release it in Chicago.

Rumlow and S.T.R.I.K.E. later accompanied Captain America and Black Widow on a mission to the Indian Ocean to rescue one of S.H.I.E.L.D's ships from the Algerian pirate Georges Batroc. After the mission, Director Nick Fury became suspicious of Project Insight, which unknown to him was Hydra's plot to use a fleet of Helicarriers to kill millions of individuals targeted by an algorithm Dr. Zola designed to select potential threats to global stability. Once the Winter Soldier (apparently) killed Director Fury, Alexander Pierce, the highest-ranking Hydra agent within S.H.I.E.L.D, had Rumlow and S.T.R.I.K.E. spearhead the operation to bring in Captain America. However, a surprise attack on Rogers in an elevator at the Triskelion failed, allowing Cap to get away. S.T.R.I.K.E. were later able to capture the rogue Steve Rogers and his comrades Black Widow and Samuel Wilson after a fight with the Winter Soldier, although the three were again able to escape captivity with the help of Maria Hill.

Moments before Project Insight was about to be launched, Captain America and his team infiltrated the Triskelion and revealed the true intention of the project and the Hydra sleeper agents behind it. Agent Rumlow and his S.T.R.I.K.E. team barged into the S.H.I.E.L.D. control room and ordered at gunpoint a reluctant Tanner Evans to go ahead with Project Insight and launch the Helicarriers anyway despite what Cap said. Agent 13 was able to intervene before Rumlow killed Evans, starting a gunfight in the control room. Later, upon hearing that Widow was with Pierce, Rumlow attempted to get to her location only to be intercepted by Samuel Wilson, who engaged him in hand-to-hand combat. Although Rumlow was the stronger of the two, Wilson tricked him into being hit by a Helicarrier crashing into the Triskelion.

Although Agent Rumlow was presumed dead, he in fact survived the crash albeit horribly burned. After recovering, he found out that Pierce had been killed during the attack. He escaped the hospital where he was being kept, and assembled a group of mercenaries to aid him. He and his mercenaries attacked and robbed an illegal weapons trade.

Many months later, Rumlow, now going by the alias "Crossbones", was pinpointed by intel to be headed for Lagos, Nigeria.

Retrieved from "https://marvelcomicsfanon.fandom.com/wiki/Brock_Rumlow_(Earth-1010)?oldid=164244"
Community content is available under CC-BY-SA unless otherwise noted.