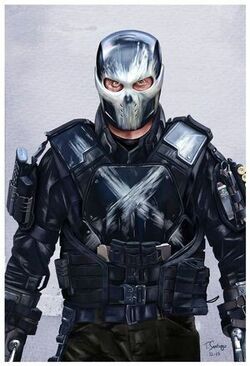 This is for dropping a building on my face, you son of a bitch!

Brock Rumlow was an agent of S.H.I.E.L.D., who was secretly a sleeper for Hydra. His unit often worked closely with Captain America and Black Widow, which gave him an appreciation for the heroes. Although, he knew he would not hesitate if he had to kill them.

After Hydra revealed itself, Rumlow was on the front lines to fight off S.H.I.E.L.D. However, during the battle Rumlow was caught in an explosion that badly scarred him. He was experimented on by Hydra and become something of a proto-Super Soldier.

He adopted the alias of Crossbones and began leading the charge against the Avengers. He was later present during Hydra’s raid on New York City, where he attempted to kamikaze himself in order to kill Captain America. However, his attempt failed, the explosion was contained by the Scarlet Witch. The power of the explosion did turn out to be more than she could handle, and she had to force him into a building for the rest of the explosion to take hold and die out.

Retrieved from "https://marvelcomicsfanon.fandom.com/wiki/Brock_Rumlow_(Earth-101)?oldid=249870"
Community content is available under CC-BY-SA unless otherwise noted.