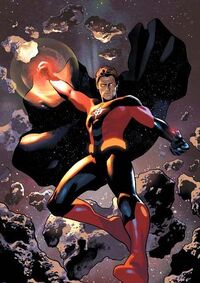 Detective Van Patrick had been working on the case of Johnny Corwin for several years. Corwin had been on a murder spree for a while, but then he stopped all of a sudden. A few months after his disappearance, Corwin resurfaced in the Van Patrick house. Brian came home from work to discover that his house had been broken into. He called for back up and then cautiously entered his home with gun in hand. Brian checked all the rooms on the first floor and he found nothing. So, he moved upstairs and opened the door to the master bedroom to discover his wife tied up. He ran in, but was hit in the back of the head.

Johnny Corwin was standing next to Brian with a huge grin on his face. Corwin tied up Van Patrick and then stabbed him in the stomach multiple times. Brian's wife cried out for her husband and Corwin turned his attention to her. Corwin walked up to Brian's pregnant wife and shot her in the head. In extreme anger, Brian broke free of his restraints and attacked Corwin. Johnny stabbed Brian several more times, but he managed to push Corwin out of a nearby window. Brian's back up arrived along with paramedics who managed to save his unborn children. His sons, Michael and Ian, were alive, but they had brain damage. In order to help his sons, Brian decided to use Abraham Erskine's special Brazilian revolutionary diet and isometric exercise regime on them to see if his grandfather's theories were right. The theories happened to be true, and within twenty years, Michael and Ian Van Patrick became the greatest student athletes in the country. Even though his sons would recover, Brian was even more determined to put an end to Johnny Corwin.

Michael and Ian had both received full scholarships to Kentucky State University. Unfortunately, news spread that the two were the great-grandsons of Abraham Erskine, the man who created the Super-Soldier formula. Their scholarships were revoked and the awards they had received were taken back. Brian assured the media that their abilities were all natural and not superhuman. Brian didn't want his sons to be discouraged by their abilities, so he notified people who were interested in them.

The top of the list involved Michael and Ian being trained at Camp Hammond[2] to become heroes as apart of the Initiative[3]. Brian's sons pushed their father to allow them to go and he gave them his full approval. With his sons gone, Brian decided to follow a lead on Corwin and move to New York. Corwin may have been hiding out in New York City for the past two years.

Once Van Patrick arrived in New York, he immediately dove into the case. After a few months of working on the case, Brian was given a partner. James Walker had just been transferred from Washington, D.C.'s metro police department. He was easy to work with and was determined to find Johnny Corwin. Soon after, the NYPD received a tip that Corwin and his accomplice were hiding out in an abandoned apartment complex. Brian and Walker were the first on the scene. Corwin said that he had hostages, but Brian knew that he was lying. Corwin never took hostages, he killed whoever he could get his hands on.

Van Patrick went into the building and James soon followed. Brian and James kicked down the door to Corwin's room and they saw him. A firefight erupted inside the room. All of a sudden, the building began to shake. James looked out of a nearby window and said that the building was flying. The shooting stopped and everyone looked outside. Corwin was still focused on trying to kill the officers and he fired at them when they had their backs turned. They were both hit and Corwin moved in for the kill. Before he could pull the trigger, Corwin and his partner disappeared.

The building landed, so Walker and Van Patrick went outside. They were somehow in the desert. It appeared that a war of some kind had taken place before they arrived. Then Brian and James heard two voices calling out to them. They discovered two men who were mortally wounded. They called themselves Nova and Quasar. The two explained that they had been fighting a battle against the cosmic being known as Galan[4], and his heralds. Their fight erupted in space and after Galan was wounded, he came to Earth to recuperate. Nova and Quasar followed him to end the battle. The team managed to destroy all of Galan's heralds, but at the cost of most of their energy. They were powerless against Galan. In one last effort, they sought out two replacements. It happened to be the duo of Walker and Van Patrick. The building was brought, but they didn't know about the other two inside. Galan had claimed them to become his new heralds.

Quasar gave Brian his Quantum Bands and he became the new Quasar. The Xandarian Worldmind[5] chose James to be the dying Nova's replacement. Quasar and Nova's final wishes were for Brian and James to stop Galan and his new heralds. Before they died, the former Quasar and Nova, informed their replacements of Galan's last known location.

Quasar and Nova went to the area and they found nothing. However, the Quantum Bands detected Galan's trail. The duo followed it and they could see an enormous figure in the distance. When they arrived, the two were face to face with Galan. They attempted to destroy him, but they were stopped by his newly created heralds. Corwin had been transformed into Proteus and his murderous girlfriend became Stardust. Proteus had his sights set on Quasar and he went after him. Nova defended himself against Stardust's attacks.

As Quasar landed hit after hit, Proteus seemed unaffected. Galan was apparently giving his heralds a constant supply of cosmic energy. Quasar told Nova to destroy Galan and he took on both Proteus and Stardust. Quasar constructed a hundred versions of himself and sent them after the heralds. Then he went to help Nova defeat Galan. They were succeeding in their fight against Galan and were close to ending him. Galan emitted a cosmic shockwave that pushed back Quasar and Nova. He called for his heralds to defend him. They came to his side and turned on him. With their incredible power, the heralds tore their former master apart. Proteus absorbed some of Galan's cosmic abilities. He pointed at Quasar and Nova and sent a blast at them. Nova pushed Quasar aside and was hit by the blast. Proteus and Stardust overpowered Quasar and he was forced to retreat.

In a few short months, Proteus with his allies and followers took over the planet. He successfully exterminated most of the heroes and villains. Quasar was never in hiding, during that time. He constantly fought Proteus and Stardust, but they became too powerful. When Nova returned, he joined the fight with Quasar. They gathered dozens of heroes and villains alike to fight Proteus, but they were still defeated. As their numbers lessened, Proteus' grew. The only fighters remaining were apart of an underground resistance led by a man called Hyper-Shadow. The group constantly planned attacks and then Quasar's bands detected that Proteus left the universe. They took this opportunity and found victory. While Quasar and Nova fought Stardust, the Resistance fought and defeated nearly all of Proteus' followers. The Scarlet Spiders focused on the people that Proteus converted into his personal heralds.

The Resistance morale rose dramatically after the win. While talking with Nova, Quasar detected Proteus was returning, but with someone else. Quasar, Nova and the Scarlet Spiders would go on a covert mission to find out who the other person was. They arrived beneath Proteus' tower in the sky and Quasar sent the Scarlet Spiders up to do recon. They crawled around the building and returned with information. Proteus was torturing someone and no one else was in the tower with them. Quasar and Nova wanted to take this opportunity to destroy Proteus. They flew to the tower and left the Scarlet Spiders behind. Nova blasted the top portion of the tower off to get Proteus' attention. He came out and Quasar and Nova began their assault. While they were fighting, Spider entered the tower to find a severely wounded man. He picked him up and glided down towards the ground. The Scarlet Spiders returned to base with the wounded man. Quasar and Nova continued their fight with Proteus. Proteus knew he was losing the fight, so he retreated to space and left a cosmic bomb in his place.

Quasar constructed a giant hand and grabbed the bomb. He used all his might to throw it into space after Proteus. He and Nova went back to base to find out the situation. The man that Spider rescued, looked as if he were going to die. He woke up and said his name was Tyson Rios. Tyson adjusted to a new universe well and he joined the resistance. He did not know that Tyson Rios was the name of the Resistance leader, Hyper-Shadow. When Hyper-Shadow died he asked Tyson to take his place and he did. With the Crimson Shadow as their leader, the Avengers had a renewed chance and beating the threat of Proteus.

Van Patrick is proficient in many aspects of criminal detective work and police procedural matters. Van Patrick served in the United States military and was trained in hand-to-hand combat. By his own account, his martial prowess is honed to the point that he could defeat a Green Beret in physical combat. He has also shown remarkable strength of will and an ability to maintain his mental fortitude and sanity in situations.

Brian Van Patrick possesses the strength level of a man his age, size and weight who engages in intensive regular exercise.

Retrieved from "https://marvelcomicsfanon.fandom.com/wiki/Brian_Van_Patrick_(Earth-826)?oldid=155996"
Community content is available under CC-BY-SA unless otherwise noted.