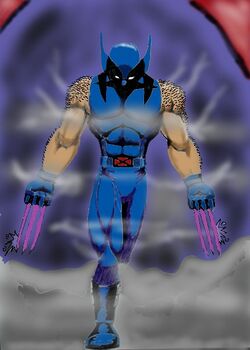 Howl had a crazy life. Not many kids deal with growing up in the same house as the X-Men. Especially when Wolverine is your dad! Growing up, and watching the X-Men line-ups shift, and as the offspring grew, he realized that he was the third one with claws and a healing factor. Feeling used, he left, but he didn't know where to go. He considered making the F4 the F5, but felt that wasn't his gig. When he heard the Avengers were hiring, he barged in and made himself at home. He was the first recruited member, though he wasn't really recruited, and was not originally well received, but grew to be a cherished member.

Brian first existed after a tense X-Force mission, back when Wolverine led the strike team. He was one of the first offspring in his universe, and he enjoyed being an X-Man. It was always interesting living with people who had powers. He even was allowed to be on the team after he defeated his dad and mom together in the Danger Room. Life was good for young Brian.

But, as he saw people come and go, he also saw that many new children were coming to the Xavier Institute, due to them being children of former X-Men. When the most recent line-up was revealed, Howl realized that he was one of three people with claws and a healing factor. He, and his half-brother White Wolf both had claws and telepathy. Feeling like nothing more than a bike's third wheel, he left the Xavier Institute by night, leaving nothing but worried parents behind. However, his parent's innate sense of right told him he still had to be a hero. So, he decided that he would rather be part of a team than go it alone.

His first thought was that he could join the Fantastic Four and make them the Fantastic Five. But then he realized that 4 adults would not easily accept the son of Wolverine, even though his dad had once helped replace them while they were away. So, he thought that he could join the Avengers, which is what he set out to do. He crashed the Mansion, and was taken down by Spider-Web's stingers. When he came to, he revealed that he went to them in hopes of joining them, telling them he had nowhere better to go. Feeling they would regret it later, they accepted. However, when Ghostdevil lost her powers temporarily, Howl proved his talents were of use. Then the team realized what an asset they really had.

Healing Factor: Brian's body heals at an amazing rate, allowing him to heal from broken bones in days, and small cuts in seconds.

Enhanced Senses: Howl has enhanced hearing, smell, and vision. He can track anyone by their smell, he can see perfectly for up to 100 feet away, and he can hear screaming from a distance of 500 feet.

Advanced Longevity: Howl has an increased lifespan, allowing him to potentially live for a few hundred years.

Toxic Immunity: Howl cannot be poisoned by any toxin native to Earth.

"Psychic Claws:" Brian can manifest psychic claws that are made of raw mental energy. These are capable of "leaking thoughts" when stabbed into another's head, can sever the bonds between molecules, and can be made solid with enough effort, though making them solid is extremely draining of his energy.

Howl was trained by both of his parents in armed, unarmed, and minor psychic combat.

Retrieved from "https://marvelcomicsfanon.fandom.com/wiki/Brian_Howlett_(Earth-1175)?oldid=255400"
Community content is available under CC-BY-SA unless otherwise noted.