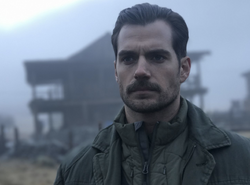 My own sister betrayed me and threw me in this hell. As soon as I get out of here, I'm going to return the favor.

Brian Braddock was a dedicated MI-6 Agent who was close with his mutant sister, Psylocke, who worked as his partner. Brian was always slightly jealous of Betsy's mutant abilities, but made up for it with his incredible talent for the work. He eventually earned himself the nickname "Captain Britain", due to teaming up with the S.H.I.E.L.D. Agent Captain America on multiple occasions.

However, after Psylocke became brainwashed by Apocalypse into becoming the Horseman of Conquest, she attempted to prove herself to him by betraying Brian, and handing him over as an offering. Apocalypse was pleased, and placed Brian in the Sphinx, a death camp for superheroes and people of interest for the Armada.

Day by day, Brian watched as the Sphinx began to fill up with heroes and villains, some of which he knew, some of which he did not. His determination to one day escape is partially what inspired Black Widow to begin a rebellion, which Brian vehemently agreed to support.

But things took a turn when news of Mister Sinister's death spread to the camps. The rebellion made their last ditch effort to escape, but were overpowered by the Archangel's forces, who ordered mass execution in the camps. Brian and the others were then forced into a Terrigenesis Chamber, where they were exposed to the Mists and died, due to lacking Inhuman DNA.

Retrieved from "https://marvelcomicsfanon.fandom.com/wiki/Brian_Braddock_(Earth-9999)?oldid=246087"
Community content is available under CC-BY-SA unless otherwise noted.