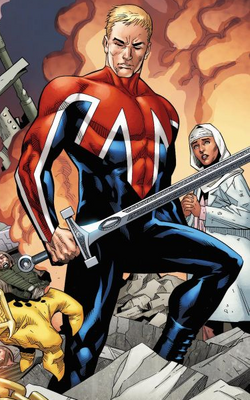 Captain Britain's history is identical to that of his Earth-616 counterpart up until Juggernaut was launched into space by Skaar. He landed in the backyard of Psylocke's Lake House in England. He and Elizabeth helped nurse him back to health, after which time, Juggernaut decided he owed them a favor. Brian enlisted him as an American-based agent of MI-13.

Interdimensional Energy Conduit: His abilities are powered by interdimensional energies which are concentrated around the British Isles of each reality and also in Otherworld; moving too far away from the field will cause eventual power loss unless a power-enhancing costume is worn. After being lost in the timestream for a while, Brian briefly had precognitive flashes, though these eventually abated. For a time, all of his abilities were localized to Britain; if he went abroad for too long a time without wearing his costume, his powers eventually diminished to nothing. His costume acts as an antenna and battery, allowing him to retain his powers wherever he goes. When he and Meggan destroyed the Otherworld energy matrix at Roma's prompting, however, the energies that allowed him to retain his power within the UK without his costume were dissipated. Hence, to retain his powers anywhere on Earth, he must wear the costume at all times. Recently, Brian has gained the ability to use his powers even without his suit. They are now based on his confidence. With greater confidence comes more power, and he weakens as his confidence does.

Originally, his powers were linked to the Amulet of Right, worn around his neck, and he depended on a mace-like Star Scepter to fly. Later on Merlyn changed his costume just before he entered an alternate Earth (Earth-238), removing the Amulet and the Scepter, and placing the powers in his new costume. Not long after that he was killed by the Fury and had his body remade by Merlyn, who chose this point to make his powers innate and stronger, with his costume merely serving as a "battery" and amplifier. Currently, Brian's powers are sustained by his own confidence and heritage as the son of a denizen of Otherworld. Thus, the more confident he is, the greater his powers are and vice versa.

Brian is a skilled scientist, acrobat, and fighter.

Equipment: Captain Britain's costume stores interdimensional energies, acting as a battery for when he is away from the matrix which surrounds the British Isles. His costume has also at times been able to generate a protective force field (originally, this power came from his quarterstaff) and a more recent version is also able to adopt a 'stealth mode' which helps him operate more unobtrusively.
Transportation: None known.
Weapons: None known.

Retrieved from "https://marvelcomicsfanon.fandom.com/wiki/Brian_Braddock_(Earth-858)?oldid=41098"
Community content is available under CC-BY-SA unless otherwise noted.