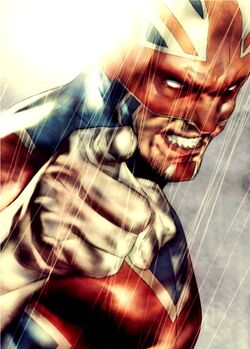 I am Captain Britain and I am one the of best and brightest soldiers Britain can ever offer!

Brian Braddock was born at the Braddock Manor around the late 1970s, his family's ancestral home in the town of Maldon, Essex, England. He was the son of Lord James Braddock and Lady Elizabeth Braddock. He grew up with his twin sister Betsy Braddock and his older brother James Braddock, Jr. Brian eventually graduated in college as student in physics, ahead of his years, at London's Thames University. Inheriting the scientific aptitude of his bio-engineer father, Sir James Braddock, Brian eventually joined him at the Dome in Brussels, working for the European Defense Initiative's super-soldier program. Each member country provided a team that worked on its own designs, with the elder Braddock overseeing the project as a whole. Brian worked on designing an exo-suit which could enhance the wearer's abilities. Despite this setback, the project continued working to create a European Union equivalent of the Avengers Initiative that was planned to form in the United States.

Inspired by the legacy of Captain America (who still hasn't been found) and his twin sister's heroism as an mutant and an X-Man, Brian finished and perfected his own armor with the help of his older brother Jamie, proudly taking by the codename Captain Britain, the modern-day national hero of Britain. With twelve other candidates from the E.U. member states in various states of readiness, the E.D.I. prepared to go public as its American counterpart S.H.I.E.L.D. already has in the States. As Captain Britain, he and his fellow armored comrade-in-arms have dealt in various covert missions both in England and across all of the European continent. Brian and his allies even witnessed the ancient mutant Apocalypse's global-scale havoc which heavily devastated his country (due to Mangeto's alterations with the planet's magnetic poles) by the late 1990s. In response, he initiated and participated in the search and rescue operation across England, while his fellow captains do the same thing in their respective countries, a particularly task that fatefully got E.D.I. out in the open, in the face of the public.

At one point, Brian and the rest of his crew were sent on a mission in Iraq to confront and apprehend the super-powered terrorists known as the Liberators, led by a ruthless super-soldier named Abdul Al-Rahman, who was known by many as the Colonel for stealing a biological agent, that could be potentially used as a weapon. During the mission, Brian and his team manages to take the upper hand in defeating the terrorists, until the Colonel successfully aims and throws Brian's own quarterstaff into the back of his suit through his shoulder blade, damaging his suit and even worse, impaling him. Brian somehow miraculously survived and continues to fight Colonel until he stabbed Brian once again in his back of suit, causing for it to unexpectedly explode.

The Colonel was critically injured following the explosion, but still manages to flee with some of the Liberators out of the warzone (without the bio-agent since they had managed to reclaim it), while Brian somehow manages to survive the explosion as well, but is still unconscious and had three of his limbs dismembered after the explosion. He was taken by his teammates back into the E.D.I. headquarters, and was in comatose for several weeks, before waking up again, only to realize that he can't be part of the team after what happened.

Due to his critical state, he was no longer allowed by his superiors to be a part of the team, believing that he might not be able recover from his extreme injuries, even if he kept on insisting his superiors and begged them to allow him to join the team again, including his father, who sadly rejected him out of mercy after finding no other solution to Brian's paralysis.

Due to being badly crippled, his father built him a new exoskeleton-like device that could help him walk again, but Brian had problems to adapt to it (even when he is being constantly supported by his family, including his beloved childhood friend and girlfriend Meggan Puceanu), which gradually slowed his recovery overtime. Because of his constant struggle trying to recover, he grew tired and eventually gave up trying, leading him into trauma and chronic depression from time to time.

Nevertheless, Meggan never stopped motivating Brian, believing that he can still make a difference even if he is paralyzed, or even if he couldn't serve in the E.D.I. anymore. Meggan would always be there for Brian, ultimately proving her love for him. Eventually, after a few months, Brian manages to adapt using new cybernetic enhancements that replaced the limbs he lost during the incident, which were developed by Stark Industries themselves.

After a few days of mastering his movements, Brian and Meggan finally got to leave the hospital, returning back into the public eye. Although recovered and "fixed," Brian still had to deal with criticism from several people in regards to his cybernetic enhancements, which even led some of his old friends to comment that he wasn't normal anymore, or that he became a "robot" or a "cyborg," started getting rejected by some of his loved ones. Feeling left out, Brian packed up his things and emotionally left Meggan and their apartment without even telling her. He kept himself remained hidden from the face of society and everyone else in his life.

While walking in an alley wearing his hoodie jacket, Brian was continuously followed and approached by three strange men. He decided to stop and ask the three what they wanted from him. The thug in the middle told him that he recognized him from the news, assuming that Brian's family was very wealthy. Brian tried to lie, implying that whoever they're looking for isn't him. The man insisted, and demanded all of his belongings.

As a result, Brian tried to defend himself in which he was successful, beating up the first and the second thug only to be beaten up by the third thug using a electric stun baton. Even with his cybernetic enhancements, he was powerless as the all of the thugs kept on beating him to a pulp while painfully electrocuting him. The electric baton of the thug suddenly breaks off while hitting Brian with it, and while Brian was standing in a puddle of water the thug accidentally drops it into the puddle itself, sadly electrocuting Brian to a crisp.

As a result of electrocution, all of Brian's genetically-altered cells starts mutating and begins to manifest as he felt a strange and mysterious energy rising inside of him, and then his once missing limbs somehow started regenerating swiftly, causing for his cybernetic limbs to crumble and collapse out of his body. When the thug tried to stab Brian as a last resort to ensure he was dead, the knife broke in half as it hits through Brian's back. The thug was confused that the knife broke, before Brian catches all of their attempts on beating them once more and finally in the end, he fights them all off effortlessly.

After those events, Brian managed to escape, running away from the alleyway until he arrives and stops at the middle of the road of a small town and where he started fainting, when unexpectedly, he was accidentally hit by a van, who immediately delivered him to the nearest hospital for his treatment.

During his second stay at the hospital, Brian had been taken under the custody of E.D.I. once again, after his father had found out about his recent whereabouts. There, they studied and speculated on the reason of Brian's mysterious cellular regeneration when Brian was still comatose, and continues to question how his limbs had grown back out of thin air. Though it was later revealed that the cause of his mysterious enhancements were no accident, and was caused by an unknown energy source.

As usual, his father and his co-worker named Daniel Merlyn had collected several samples of Brian's blood and used it for research and study out of curiosity. When the rest of E.D.I.'s superiors had suggested on using Brian's blood so they can create a new formula similar to the Super-Soldier Serum, his father disagreed, believing it would be very unethical to take some of his son's blood and just use it as some kind of a "biological weapon." As a response, Sir Braddock chose to hide all of the samples in two secret vaults at different locations, some located at the Braddock Mansion, and the other one's located at Merlyn's laboratory, where no one would've found it, not until later after Brian's wake.

After a few days, Brian finally woke up from his coma, finding out that Meggan had been beside his bed all along, waiting for him to wake up. They embraced as Brian apologized for leaving her without even a word. Meggan immediately forgave him, and told him that she will always stay by his side, no matter what.

Later on, the E.D.I. ultimately apologized for rejecting him and welcomed him back to his old team now that he's alive and well, so he can help them train his abilities and study his genetic structure as well after he went through several genetic changes, and maybe they can create a serum from it, and at the same time serving and protecting the European Union from both international and domestic threats. Brian gladly accepted their request, therefore becoming the legendary Captain Britain once again.

Eventually, Brian would work and team-up alongside other several superhero teams such us the Avengers, Fantastic Four, and the X-Men, and many more on some occasions if really necessary for the sake of humanity's safety. No matter what others might think of him, Captain Britain is and will always be one of the best and if not, the brightest soldier Britain has to ever offer.

Interdimensional Energy Conduit: Brian never had any superpowers but he wore an exo-suit designed by his father. His exo-suit stores and were powered by interdimensional energies from an unknown mystical source and was designed by his father, Sir James Braddock. It allowed Brian to enhance in his strength, endurance and durability, gain force field protection (from his quarterstaff), fly at supersonic speeds, and even regenerative healing factor.

He remained wearing the exo-suit as a member of the European Defense Initiative, fighting major crimes in the United Kingdom, until the following accident had occurred. During this accident, his exo-suit had a major complication causing for it to accidentally explode while still wearing it during a mission. Following the accident, Brian started experiencing the abilities from the suit even when he's not wearing it, revealing that the explosion had caused the exo-suit's powers and capabilities to transfer into his own system, giving Brian real superpowers. Because of this, Brian gained several superhuman abilities, formerly from his suit permanently transporting it into his own system:

Retrieved from "https://marvelcomicsfanon.fandom.com/wiki/Brian_Braddock_(Earth-61615)?oldid=266022"
Community content is available under CC-BY-SA unless otherwise noted.