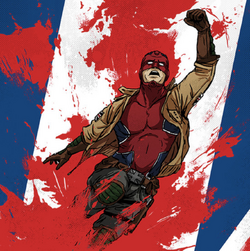 First we take down the bad guy, then it's off to get some tea and crumpets. I'm kidding, I'm not a walking stereotype.

Brian Braddock was always the apple of his parents' eye. They became prouder than ever when he invented a technologically advanced suit that would allow him to fly and lift objects ten times above that of a normal human. He became the crimefighter Lionheart, and instantly gained fame all around Europe.

However, despite his fame and fortune, he found himself becoming jealous of his little sister, Betsy, when she developed her mutant abilities. Swallowing his pride, Lionheart agreed to train Betsy on how to use her powers to fight crime, but they were blindsided when she was abducted by the Hand.

Brian fell into a deep depression, believing he had failed his sister. He hung up his costume and decided to retire, but it wasn't long until he was approached by the British faction of S.H.I.E.L.D., who wanted to recruit him onto the team Excalibur.

Reluctantly, Brian agreed and became Lionheart once more, hoping to make amends for his past failure. After fighting alongside his new team for some time, he discovered that his sister was alive and well, and that she had become the X-Force member called Psylocke. They reunited and caught up, agreeing that she would split her time between X-Force and Excalibur. However, Brian decided it was his responsibility as the older brother to get to know Psylocke's new family, and became one of the only humans to be welcomed onto Krakoa.

Retrieved from "https://marvelcomicsfanon.fandom.com/wiki/Brian_Braddock_(Earth-101)?oldid=249266"
Community content is available under CC-BY-SA unless otherwise noted.