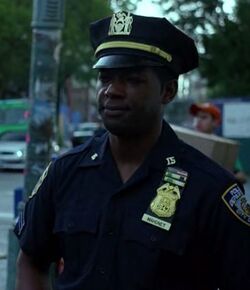 We've been enemies since we were four, Brett.

Brett Mahoney was born and raised in Hell's Kitchen to Bess Mahoney. Since he was a young boy, he has had a strong friendship and rivalry with another local boy named Foggy Nelson. When he grew up he became a officer of the New York City Police Department.

Working with Nelson and Murdock

Please stop giving my mom cigars, Foggy."
"What? She'll outlive us all.

While on duty Mahoney ascended the stairs of the 50 Street Station in Hell's Kitchen. As he walked along the streets he was greeted by his childhood friend and rival Foggy Nelson, now working as a lawyer. Nelson handed him a package of cigars for his mother Bess as a gift. While not happy with Nelson giving his mother cigars he did accept them. Before continuing his journey he indirectly promised Nelson to give him a heads up when an interesting case arrises that Nelson's law-firm, Nelson and Murdock could get involved with.

Homicide, female suspect found at the scene, definitely qualifies as interesting."
"She hasn't been charged yet?"
"Assistant D.A. hasn't made the call yet.

Later that evening Mahoney stayed true to his work and called Foggy Nelson, informing him about a homicide case involving a single female suspect named Karen Page who had seemingly murdered her co-worker with a knife in her apartment. Nelson and Murdock took on the case and quickly proved Page to be innocent of the crime and they even then hired her as an assistant at their law-firm.

You're going after Tully?"
"Yeah you know him?"
"Yeah, guys a real scumbag, but he stays just the right side of the law so there's nothing we can do.

While Mahoney was serving as the desk sergeant in the station, he was visited by Foggy Nelson's law firm partner, Matt Murdock. Murdock told Mahoney that they are working on a case for a friend of Mahoneys mother. Mahoney agreed to help, despite the fact that Armand Tully, who was attempting to evict residents from their homes, kept his activities just legal. Mahoney then left to find any copies of the complaints made against Tully and to see if it was possible for Murdock to talk with some of the officers who took them.

Mahoney was tasked with controlling everyone who came to visit Detective Christian Blake, one of the police officers shot during a raid, seemingly by a masked man who had been working as a vigilante in Hell's Kitchen. Since the shooting Christian Blake had been in a coma. One of these guests was Carl Hoffman, Blake's partner who had come to visit his friend. Before allowing Hoffman to enter the room, Mahoney asked him to sign in before also checking what was in the bag - a meatball sandwich. Seeing nothing suspicious about Hoffman, Mahoney allowed him to enter the room.

A few minutes later however, Mahoney heard a noise coming from the heart monitor inside Blake's room and he called out to Carl Hoffman to see if something was wrong. When Hoffman wouldn't answer their calls, Mahoney, together with a few other agents, attempted to open the door, which was blocked by a chair from the inside. When they were finally able to force the door open, they found Blake lying dead in his bed, having seemingly been murdered by the man in the mask and Hoffman is laying on the ground, unconscious, having also been attacked by the vigilante.

When his mother's friend and Nelson and Murdock's sweet, elderly client Elena Cardenas was murdered outside her home by a junkie who had stolen her purse, Mahoney personally took charge of the case and phoned their offices to inform them of her death. Foggy Nelson, Karen Page and Matt Murdock arrived to identify the body. Mahoney explained what had happened to her and asked if she had any family left who could be contacted, they explained she did not and promised to take care of the funeral arrangements themselves. Both Nelson and Page cried over the death of their friend, while Murdock remained silent and still.

Hey you're the guy, the one that killed Blake and shot those cops!"
"I didn't kill Detective Blake, or shoot those cops. Blake and Hoffman were dirty, working for Wilson Fisk, along with a lot of others from your precinct. I'm not the bad guy.

--Brett Mahoney and the Masked Man

Mahoney was one of the first officers who arrived on the scene of a fire at a warehouse, which was discovered to be an illegal drug den run by Madame Gao. As he explored the facility, Mahoney encountered the Man in the Mask. Mahoney raised his gun and attempted to arrest the man, but was quickly disarmed and knocked to the floor where the man told him he was not the bad guy before escaping.

The way things are going around here, I'm thinking about taking an early pension. Move my mom somewhere warm."
"Be a shame. The only cop on the force we know for sure is honest.

Mahoney was approached by Foggy Nelson and Matt Murdock who requested any information Mahoney could give them about the activities going on at the Police Station. Mahoney reluctantly told them what information he had, although he noted that Murdock appeared to not be listening, he then told them that he was planning on retiring early and moving somewhere warmer so his mother would be safe.

While working behind the desk in the police station, Mahoney was shocked to be approached by Detective Carl Hoffman, who arrived covered in blood. Hoffman told Mahoney that he wished to make a statement. Hoffman confessed that he had been employed by Wilson Fisk to ensure that the police never discovered his criminal activity, the explained that he had gone into hiding after murdering Christian Blake and had been rescued and convinced to speak out by the Man in the Mask.

Through Hoffman's confession, the FBI were able to arrest Wilson Fisk, Turk Barrett, Senator Randolph Cherryh and anyone else connected to Fisk's criminal empire. When several corrupt police officers were pulled from the station and arrested, including Corbin who screamed and cursed as he was being taken away, Mahoney watched from the sidelines as they were being arrested with a smile on his face, knowing that the police force in New York City had just become considerably less corrupt with Fisk out of the picture.

Wilson Fisk was soon escaped with the help of his soldiers. While assisting with the man-hunt, Mahoney discovered Fisk lying on the ground beside Daredevil, now wearing a red and black costume. Although Mahoney initially held his gun to Daredevil, he soon handcuffed Fisk and allowing Daredevil to go free. Mahoney told his story to the press, who used the new name of Daredevil in the Daily Bugle's story of Fisk's arrest.

Retrieved from "https://marvelcomicsfanon.fandom.com/wiki/Brett_Mahoney_(Earth-1010)?oldid=189510"
Community content is available under CC-BY-SA unless otherwise noted.