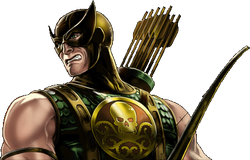 It took millions of dollars in weapons development and years of research to create the Bowman, an evil analogue to Hawkeye in HYDRA's twisted mirror version of the Avengers. He fought alongside Tactical Force, Hammer and Militant against the Avengers. Bowman acted as a reservist when Tactical Force's armor was damaged. Showing the slightest signs of defeat, the group retreated.

Bowman and Militant would later act as support to the Winter Soldier when they kidnapped and killed James Sitwell. He tried to defend the Alpha Helicarrier alongside Hammer when HYDRA was outed as being inside SHIELD, but was stopped by Hawkeye and Mockingbird.

Retrieved from "https://marvelcomicsfanon.fandom.com/wiki/Bowman_(Earth-1010)?oldid=155782"
Community content is available under CC-BY-SA unless otherwise noted.