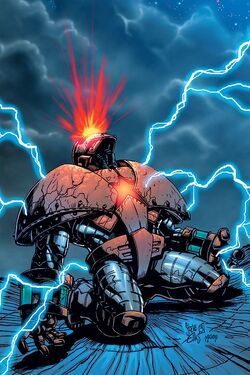 I'm still living same life even in this golden land of opportunity... How astoundingly-horrific this is...

While living in Soviet Russia, Boris Turgenov served as an agent of the KGB, and was familiar with the scientist Anton Vanko, who had designed the Crimson Dynamo Armor in America. When they have heard of Professor Vanko's scientific feats in the United States to, the leaders of KGB (which was still under the strings of Hydra at the time) assigned Boris to dispose Vanko, otherwise if Boris rejected his orders he would be swiftly "taken care of" by the deadly Winter Soldier and assign another agent to do the job for them. Despite the undiscovered truth that Hydra has both Turgenov and Vanko on their sides, Hydra intended to assign Boris in order to watch over him whether Vanko would end up betraying Hydra, unbeknownst to him. Arriving in New York City, Boris immediately crossed paths with the agency S.H.I.E.L.D. in the form of is operatives, whom he initially thought were his enemies. Forcing himself to be on the run, Boris explored the city where he was astonished by the wonders of New York, fantasizing the possibility of having to move in the free, golden land of opportunity. Unfortunate for Boris, he was eventually caught right into S.H.I.E.L.D.'s trap, lending him into interrogation at the hands of the agency's council.

After become a very powerful and wealthy Hydra superior, Anton eventually thought it was time for him to seek revenge on his old partner and friend, as well as taking down his old agency, S.H.I.E.L.D., believing that they also had "betrayed" him. Due to this, he and his army of super-soldiered subordinates planned on infiltrating a S.H.I.E.L.D. facility in an old secret base where Howard was researching back then, so he can get the chance to kill him. Just like his men, he would be suiting up in his original Crimson Dynamo Suit. During the assault, Anton and his men managed to kill several S.H.I.E.L.D. personnel until they were eventually defeated as well after Howard found a way on disarming the suits except for Anton's after he successfully evades it. Hearing this assault, Boris met with S.H.I.E.L.D. agents Howard Stark himself and Peggy Carter, who explained his reason for his reasons of visiting the country, in which their meeting ended with the reluctant alliances of KGB's agent Turgenov and the American agency in their pursuit to stop the destructive vengeance of Anton Vanko.

Along the way, Boris would also find himself being secretly confronted by Vanko himself, who tried to deceive and try to make him join their side by revealing that Boris too, was a nothing but a puppet of Hydra, just like he and the KGB was under Hydra's influence for countless of years. Hearing the ugly truth, Boris felt hopeless and defeated that he couldn't trust, only to realize that he already had hope by his side, and that hope being S.H.I.E.L.D. Returning at the headquarters of his newfound allies, Boris tried to warn them of Hydra's influence over Vanko, only to find more lifeless bodies taken by Vanko in his Vanko Armor. He tried to search for Stark in his laboratory, finding no one, although he did find something strikingly familiar: a suit of armor resembling the structure of Vanko's Dynamo Armor, only its design looked less advanced, and a lot more patriotic, as if Stark intentionally pandered to Boris' homeland, much to the latter's annoyance.

After Anton manages to successfully corner Howard Stark by himself, Boris manages to arrive in time to stop Anton as he now now wears Howard's own prototype version of the Crimson Dynamo suit, unintentionally flying him into the streets of New York City, where they fought, until he was eventually defeated. Accepting his defeat, Anton has no choice left but activated the self-destruct mode in his suit, a nuclear reactor that is large enough blow up and destroy the whole country, intending to take Howard, Boris, and everyone else with him. Because of this, Boris made the ultimate sacrifice by flying him as far as he can away from the city, flying him until they reached into the planet's exosphere, where the nuclear bomb eventually exploded, killing them both. Anton's last words were supposedly "Hail Hydra" until Boris punches him, knocking him out and replied to him invoking the terrorist organization, just before the explosion had occurred.

In his heroic demise, Turgenov was honorably credited as an agent of S.H.I.E.L.D., with Stark and Peggy concurring to have his name registered on the list of their fallen operatives, remembering. However, unfortunate for them, Turgenov never got the chance to tell S.H.I.E.L.D. the truth which died within him, the truth that they had and have always been secretly controlled by Hydra for the past few centuries, something that wouldn't even be revealed for the next few decades in the form of that event that was the Hydra Uprising.

Retrieved from "https://marvelcomicsfanon.fandom.com/wiki/Boris_Turgenov_(Earth-61615)?oldid=265402"
Community content is available under CC-BY-SA unless otherwise noted.