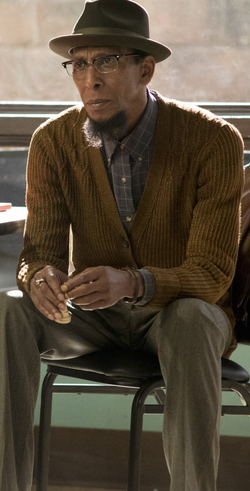 Chess is a game of anticipation. If you know every single possible move, you can anticipate your adversary's next move before he does.

Bobby Fish and Pop met each other at Marcus Garvey Park. At the park they frequently played games of chess, which Fish would win most of the time. Pop eventually became too busy to visit the park, so instead of meeting at the park Fish started to visit Pop's Barber Shop. Over the years Fish would frequently visit to play chess with the people at the shop. He also started doing Pop's taxes every year.

Bobby Fish visited Pop's Barber Shop to play chess, usually on his own. One instance, while playing against Turk Barrett, Pop and some of the others in the shop were discussing the New York Knicks. Fish agreed with Chico Diaz when he pointed out that Pop cursed. Fish corrected Pop after he mistakenly called the guy the Knick drafted Russian instead of Latverian. According to Fish the Knicks only had one option, and that was to fire Phil Jackson. This started an argument about Jackson and a former coach of the Knicks, Pat Riley. While discussing the Knicks and Pop was giving Lonnie Wilson a haircut, he witnessed Cornell Stokes, together with two of his men, enter the shop to get a haircut. While Pop was giving Stokes a haircut Fish and Barrett started mocking each other during their game. According to Turk, Fish was taking to much time before making a move and that him being called Bobby Fish does not make him Bobby Fischer. Fish responded by stating that Turk Barrett is not Turkish. They continued mocking each other. When Stokes and his men left the two of them kept playing, something Pop noticed after he got back from his break.

Retrieved from "https://marvelcomicsfanon.fandom.com/wiki/Bobby_Fish_(Earth-1010)?oldid=192406"
Community content is available under CC-BY-SA unless otherwise noted.