"Blood Ties" is the twenty-ninth episode of Assemble!'s Season Four and the one hundred and second episode overall.

-What is going on? - Captain America asked himself, as he watched vampires and demons running free on the streets of New York.

-Strange was right, it was necessary to let the Hulks go and help him. At least we don’t have Mindless Ones running around. -

-That is, in fact, true. - J.A.R.V.I.S. replied and stopped himself suddenly. -Someone is at the door. According to my database… This is impossible! -

-Let me handle this. - Captain America said, standing up, picking up his shield and walking towards the door. As he opened, he came face to face with the same man he had met during World War II.

-Come on in! - Steve said, as the young man followed him inside the Avengers Mansion. -What can we do for you? -

-It’s my uncle… Baron Blood. - Union Jack looked down. -He took my twin sister and I honestly don’t know where to start looking. -

-That’s ok, Brian. J.A.R.V.I.S., search for John Falsworth or Baron Blood in every… What was it called? -

-Sir, people have spotted John Falsworth in London, carrying a blonde young woman with him. -

As the duo was flying towards London, Brian received a call from the Human Torch.

-Brian, did you request my help? -

Steve turned the autopilot on and walked towards the intercommunicator. -Jim! How have you been? -

-I was solving something in the Middle East and when I got back to my base I saw Brian had left me a message. What happened? -

-James’ brother, John, he kidnapped Jacqueline and is taking her somewhere in London. - Cap explained.

-Well, this definitely sounds like an Invaders reunion! - Jim chuckled. -Count me in, I’m on my way! - He said before hanging up.

-This is something I do not feel with the Avengers at all. - Steve muttered.

-I’m a man out of time, kid. - He shook his head. -I belonged in the 40s, with your father, with Jim, with Braddock… I love leading the Avengers and we have become a great team. But it doesn’t beat what I felt with my team, with the Howling Commandos. -

-Not everyone gets the opportunity you got tho. Jim is an android and Brian has that strange magic… But not everyone makes it. Morita, for example… -

-No need to thank, Captain. - The Union Jack shook his head. -A pleasure. -

Suddenly, the Quinjet started shaking and the two heroes held on to the sides.

The backdoor opened and the Human Torch flew inside the Quinjet. -Told you I was on my way! - He exclaimed.

-Why didn’t Dr. Horton live in the modern times?! I could’ve been like the Vision! -

-You’re unique in your own way, Human Torch. -

The Quinjet soon landed in an unpopulated area near London and the three heroes got out.

-Baron Blood was seen headed to a cave beneath the Falsworth estate, sir. -

-Oh no… It must be the cave where he fought against my father in 1942! He always told us the same story all over again. I’ll lead you! -

As the trio got to the cave, they came face to face with Baron Blood, who was about to bite Brian’s twin sister.

Captain America tossed his shield at the vampire, hitting him in the face.

A thousand red eyes suddenly appeared surrounding the heroes, and a young female figure appeared in front of them.

-Avril Lavigne? Yes! - She jumped and started fighting against the heroes.

Baron Blood was about to bite Jacqueline when Captain America charged against him with his shield. The two men out of time started fighting against each other, until Falsworth held the Avenger tightly, ready to bite him.

Suddenly, a man flew against the vampire and started fighting him. Rogers took a couple steps backwards and looked amazed at the fight: Morbius had come to help them.

-I am against Dracula and his lackeys, and this old man is one of them! - Morbius hit Baron Blood’ face. -Do you want my help or not? -

-Yes, of course! - Steve nodded and ran to help his friends.

Avril looked at Baron Blood and then at the vampires who were falling around her. -TACTICAL RETREAT!!! - She yelled and flew away from the cave into the darkness.

John kicked Morbius’ chest and flew towards his niece, holding her by her shoulder and upper neck.

-NO! - Brian exclaimed, but none of them could arrive in time. Baron Blood had already sunk his teeth inside Jacqueline’s neck, as she started to lose blood. Union Jack started fighting fiercely against his uncle.

-Jim, take her to a hospital, she needs an urgent transfusion! - Captain America ordered the Human Torch, who held the Falsworth girl and flew away.

Morbius held Brian tightly and pushed him away from Baron Blood.

-No. - The vampire shook his head. -You are a good guy. Let me live with it, another death won’t do me any harm. -

Baron Blood kicked Morbius and picked up a boulder, before throwing it at the heroes. Captain America protected them with his shield as Michael Morbius flew against the Falsworth vampire, pushing him against a sharp stalagmite, impaling and killing him.

Union Jack fell to his knees as Steve put his hand on his shoulders. -C’mon Brian, let’s check on your sister. I’m sure she’ll make it out alive. She’s a Falsworth. -

Brian smiled slightly, before standing up and wiping his tears off.

-Not to London, no. I need to stop Dracula from taking over the world. I’m headed to Transylvania. - He muttered, before flying away.

The Captain helped Union Jack walk to the Quinjet and they took off.

-Apparently, he did, Lord of Vampires. - Avril Lavigne nodded, not looking at her master.

-Well, that’s just too bad. - Dracula shook his head. -It is time for me to come out of my castle, anyway. Spread the troops. I want vampires in every corner of the world. This will be huge. -

"You look exactly like your father in his 20s, kid."

Morbius to the rescue 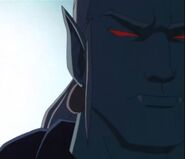 "Well, that’s just too bad. It is time for me to come out of my castle, anyway. Spread the troops. I want vampires in every corner of the world. This will be huge."
Add a photo to this gallery

Retrieved from "https://marvelcomicsfanon.fandom.com/wiki/Blood_Ties_(A!)?oldid=125887"
Community content is available under CC-BY-SA unless otherwise noted.