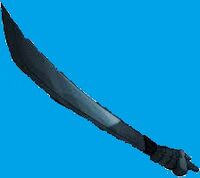 The alloy that the sword is made of is unknown and is black in color, but has shown to be virtually indestructible this sword is also extremely durable and is capable of cutting almost any substance. The Sword deflects most magical attacks. When angled in a certain way, it can instead absorb energy directed at it. It seems mostly immune to magical effects. The Sword was made by the Beast for Takeshi Hattori who was transformed into Revenge. The Sword possesses a variety of mystical properties that it possesses in and of itself and properties that it grants to those who wield it. With the BloodSword, Revenge could harness the power of the dead. The blade also grants superhuman physical strength and resistance to injury to whoever wields the sword. The blade and its wielder are linked. The sword is also capable of greatly reducing the efficiency of a superhumanly fast healing rate. The blade can not cut through psychic shields.

Curse: Due to the curse from Beast's evil, whenever someone owned, using it, they would be driven to kill and try to kill themselves if they are worthy. This bloodlust could sometimes be channeled, but would always corrupt the user in the end. Only the worthy (so far only Takeshi Hattori) can wield it without killing himself. The sword become stronger when in contact with blood.

Teleportation: It could be used to teleport to places the wielder has previously been.

Necrokinesis: the power to communicate with, manipulate, or reanimate the dead.

Mystical Link: The Sword obeys Revenge's commands as though it were alive.

The blood of the Yeti who were the guardians of the BloodSword weakened the Sword and the user.

Retrieved from "https://marvelcomicsfanon.fandom.com/wiki/BloodSword?oldid=255520"
Community content is available under CC-BY-SA unless otherwise noted.