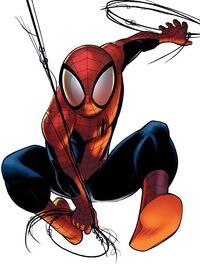 Hi, everyone. My last name is "Parker."

Aunt Rebecca and Uncle Barry raised Blake as if he were their own child. With the exception of his neighbor Sarah Stacy and tutoring subject Stanley Osborn, Parker found a few friends in high school, and was often the butt of jokes by bullies Butch Thompson and his buddies.

Blake was bitten by a radioactive spider and given the proportionate powers of a spider. He initially used his powers as the wrestler The Spider. He learned that with great power came great responsibility after he let a burglar escape that would go on to murder his Uncle Barry and would embark on a life as a superhero known as Spider-Man.

Blake took a job at the Daily Bugle working as a web designer and photographer. He revealed to Sarah Stacy that he is Spider-Man, but soon leaves in response to a police report on the bridge, and the pair embarked on a romantic relationship.

While on a date with Sarah, an alien symbiote attached itself to Blake's costume. It increased his strength, but influenced his behavior for the worst. The Carnage symbiote then bonded to an different host.

He was invited to Jason Thompson’s party along with Sarah and their friends. He was followed by a drone tracking his spider-blood anywhere because he was being targeted by the Sinister Seven.

Blake is based on the teenaged counterparts of Peter Parker from these realities:

Retrieved from "https://marvelcomicsfanon.fandom.com/wiki/Blake_Parker_(Earth-16103523)?oldid=268766"
Community content is available under CC-BY-SA unless otherwise noted.