Blade is a Marvelette Cinematic Universe Phase Five film. It was released on October 28th, 2022, following Captain Marvel: Galactic Storm and preceding Ant-Man and the Wasp and the Ant-Man. The film is directed by Jordan Peele. 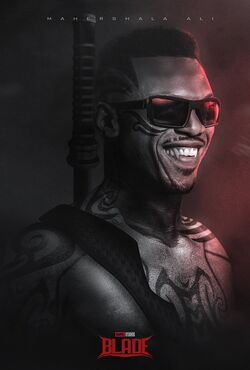 Following the death of his mother, Eric Brooks becomes the Vampire Hunter known as Blade, and finds himself teaming up with the proto-vampire Morbius, as well as a woman named Rachel van Helsing, who has been hunting vampires her entire life. However, their crusade will eventually lead them to uncovering the truth surrounding the legend of Dracula...

Retrieved from "https://marvelcomicsfanon.fandom.com/wiki/Blade_(Marvelette_film)?oldid=244470"
Community content is available under CC-BY-SA unless otherwise noted.