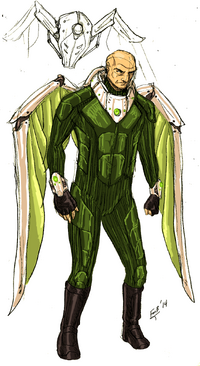 Earth-1111
Base Of Operations
Somewhere in New York
Characteristics
Gender

I'mma turn you into a stain on the sidewalk, kid!

Blackie Drago was an employee at Hammer Industries, he was eventually fired but not before stealing Hammer Industries tech. He used it to build himself a suit capable of flight. He then began a crime spree across New York eventually to be stopped by Spider-Man and arrested and incarcerated at the Triskelion.

Equipment: Vulture's Wings: Its wings are energized by a power pack on his back and will shut down if the pack is damaged.
Transportation: The suit's wings enable him to fly at speeds approaching 100 mph.
Weapons: The suit's wings can fire barrages of razor-sharp artificial feathers at his targets. He can slash his opponents using claws on his gloves and spikes on his gauntlets. He also carries at least 5 highly explosive grenades.

Retrieved from "https://marvelcomicsfanon.fandom.com/wiki/Blackie_Drago_(Earth-1111)?oldid=169015"
Community content is available under CC-BY-SA unless otherwise noted.