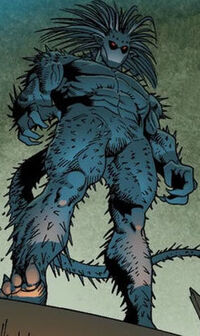 The symbiote! Hand the creature to me!

Blackheart is a personal hunter hired by the Life Foundation that had the job of capturing symbiotes and eliminating anyone who stood in his way.

His early life is unknown.

Getting the Wrath Symbiote

Currently Human. He does not have any powers.

Retrieved from "https://marvelcomicsfanon.fandom.com/wiki/Blackheart_(Earth-7777)?oldid=220127"
Community content is available under CC-BY-SA unless otherwise noted.