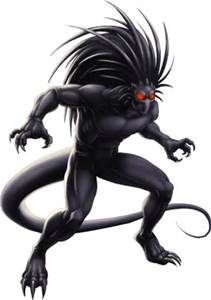 Little is known about Blackheart's life before Mephisto's association with the Masters of Evil. It can be assumed to be similar to his mainstream counterpart.

Retrieved from "https://marvelcomicsfanon.fandom.com/wiki/Blackheart_(Earth-6109.2)?oldid=128517"
Community content is available under CC-BY-SA unless otherwise noted.