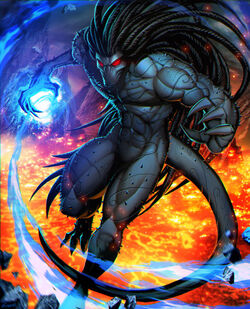 The Wicked Son of the Devil, Basil Hartley
Identity

Ah... I see your heart is almost as black as mine.

A being of pure hatred and evil, Blackheart was always Mephisto’s favorite child. That is why when his father began implementing the Ghost Rider as his bounty hunter on the mortal world, Blackheart took personal offense to it.

Unwilling to share his father’s praise, Blackheart has since dedicated himself to kill every single host of the spirit of Zarathos. He has, so far, been successful. But after the murder of a man named Johnny Blaze, Zarathos transferred himself to Robbie Reyes.

Reyes was unlike any other Ghost Rider Blackheart has encountered. He was young, sloppy, and inexperienced, and yet, Blackheart has proved incapable of killing him. His mission only became more difficult when this Ghost Rider began allying himself with the likes of other supernatural heroes such as Blade and Doctor Strange.

Blackheart has since uncovered the truth about the Prophecy of Infinity, and how Earth’s heroes are giving everything they have to stopping it. Blackheart then volunteers to help his father, who was aligned with Thanos, to help ensure the prophecy comes true.

Retrieved from "https://marvelcomicsfanon.fandom.com/wiki/Blackheart_(Earth-101)?oldid=250175"
Community content is available under CC-BY-SA unless otherwise noted.