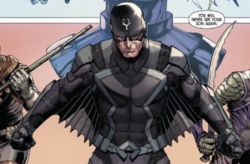 The youngest born in the Boltagon royal bloodline, Blackagar is also the most powerful. Exposed to terrigenesis right at birth, his voice was instantly capable of destroying solid objects at a whisper. He was raised in seclusion to try and gain control over his abilities. His older brothers, Vox and Maximus, grew to hate him because of their parents' devotion to Blackagar. The jealousy would even led Vox to abandon Attilan and Maximus to form a secret cult that planned a rebellion against the throne.

Blackagar was eventually paired with Medusalith Amaquelin to develop a special sign language that would allow him to communicate. Over time, the two of them fell in love and went on to be crowned the King and Queen of Attilan. For years, Black Bolt ruled his people in peace, keeping them out of conflict and contact with the people of Earth, as Attilan was located on the Moon.

However, one day Medusa went missing, and Black Bolt received word from his advisor, Karnak, that she was on Earth. He then sent a squad led by her sister, Crystal, to the Earth to recover her. This led to them coming into contact with the group known as the Fantastic Four, who were then captured and taken back to Attilan.

However, the misunderstanding was soon cleared up and Black Bolt even came to respect the Earth heroes. He and Mister Fantastic came to an understanding and formed a partnership between the Fantastic Four and the Inhuman Royal Family. Since then, the Inhumans have gradually begun to become more involved in Earth politics, forming relationships with other superhero teams like the Avengers and the X-Men.

After the Avengers spread word of the Prophecy of Infinity, Black Bolt dedicated all of his forces to preventing any possible outcomes foretold. One such event foreshadowed in the Prophecy included the Kree Empire ordering the execution of all Inhumans, to "fix their mistake".

After the Kree assassin, Wraith, was sent to Attilan and beaten badly by Black Bolt, he personally led a squad of Inhumans and Avengers to Hala, the home planet of the Kree. It was there that they discovered Black Bolt's eldest brother, Vox, had formed an alliance with the Kree out of spite for his brother and his species. The opposing teams then engaged in a lengthy and bloody battle that ended with Vox driving a sword through Black Bolt's chest, and Black Bolt letting out a scream that shook Hala to the core, beginning to destabilize the planet itself. In his final moments, Black Bolt was surrounded by his wife, cousins, and friends, who he simply smiled at before fading.