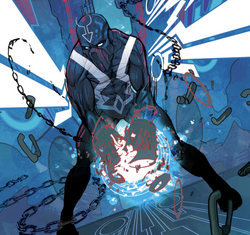 Black Bolt was exposed to the Terrigen Mists while he was still in his mother's womb. As a baby, his cries would destroy entire neighborhoods, and the power of his voice only grew as he got older. This led to him taking a vow of silence, and creating his own form of sign language that he shared with his wife, Medusa.

Following his father's death, Black Bolt learned that the Inhuman Royal Family was in charge of protecting the Reality Stone from Thanos. Knowing this was part of the reason Black Bolt was so receptive to forming alliances with the human heroes like the Avengers and the Fantastic Four. But even still, these partnerships could not prepare Attilan for the day the Black Order attacked. After putting up a valiant fight, Black Bolt ordered Medusa to begin evacuating the city when it became clear they could not win. He unleashed the full power of his scream on Thanos, and was successful in destroying his ship, but only proved to anger Thanos even more.

Drained of energy, Thanos was easily able to overpower him, and tortured him to the point of using his scream to break through the barrier protecting the Reality Stone. Rather than kill Black Bolt, however, like he had done with several other members of Infinity Watch, Thanos decided to take him prisoner and keep him as a trophy, and even occasionally a power source for his weapons.

Retrieved from "https://marvelcomicsfanon.fandom.com/wiki/Blackagar_Boltagon_(Dimension_0)?oldid=263201"
Community content is available under CC-BY-SA unless otherwise noted.