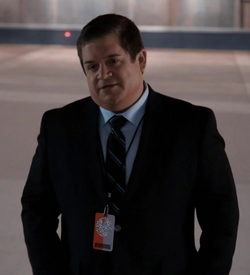 Earth-1010
Base Of Operations
The Playground
Characteristics
Gender

I'm Billy, Sam's the shorter one.

While growing up, Billy Koenig nicknamed his brother, Eric Koenig, "Lightning Foot." Billy and Eric Koenig were stationed at secret safe houses belonging to Nick Fury in the aftermath of the Battle of New York. As the base did not have a name, Koenig named the base the Playground himself while his brother named his base Providence. While stationed at the base for two years, Billy and Eric Koenig continued to communicate and played online games with each other.

During the HYDRA Uprising Koenig remained at the Playground and got word that Eric Koenig had been murdered by the HYDRA agent Grant Ward. Director Nick Fury brought Jemma Simmons and a comatose Leo Fitz to the base for recovery when he saved them from drowning in the sea. When Agent Phil Coulson and his team arrived at the Playground, Agent Koenig greeted him enthusiastically. Coulson's team stared at him bewildered, believing he was his late brother. Koenig stopped their confusion by introducing himself and letting them know that he knew his brother was deceased; Koenig went on to welcome them to the base and prepared them for the continued fight against HYDRA.

American flight 2.20 gets in three minutes early."
"Copy that. And what's with you rage quitting COD last night?"
"What's with you and all the spawn kills?

One morning in 2014, Billy called Sam Koenig to inform him that Director Phil Coulson was on his way to see him and would arrive earlier than calculated. Billy then confronted his brother about the video game they had played the night before and why he was killing him whenever he spawned and ate pretzels in his microphone.

The Director wants you for debrief."
"Feeling is mutual, throw him up on the big screen, and tell him that his enemies have gone bullet proof."
"He's in his office.

Antoine Triplett discussed with Skye how similar Billy was to Eric and if they were just twins; meanwhile, Leo Fitz had grown jealous of Koenig because he had taken Fitz's place doing much of the technical support jobs. When Coulson invited Isabelle Hartley, Lance Hunter and Idaho to join their team, Koenig remained distrusting. When they returned from a mission, Koenig informed them that Coulson was waiting for them.

When Coulson ordered Skye to gain intel of Creel's connections to HYDRA from Grant Ward, Koenig took her down to Ward's cell in Vault D. As they walked, Koenig explained the security details of Ward's Inertial Confinement Laser Barrier and how to block him out if needs be. Skye remained highly nervous of being near Ward and questioned if it was possible for her to accidentally free him, but Koenig assured her that she would be perfectly safe and in control. Due to Koenig's encouraging words, Skye found the courage to confront the man who had betrayed her and their team.

Koenig joined Coulson and Melinda May in his office to watch as the questioning took place. Skye was able to get Ward to confess key details about Creel before he gave them important information about how HYDRA could be communicating with him. Koenig confirmed what Ward was saying was true and they soon gained access to HYDRA's communication channels across the world and learnt that Creel was being sent to assassinate Major Glenn Talbot, giving them time in intervene and save Talbot's life.

Alarms have sounded; chances of them being captured or killed have skyrocketed.

During the rescue of Talbot, Coulson ordered Isabelle Hartley and Lance Hunter to kidnap him so he could be questioned. Once Talbot was taken onto the Bus, Coulson confronted him and got him angry enough for Talbot to keep talking and to grab the sides of his chair, allowing Koenig to get his fingerprints and download his voice patterns. Talbot was then shot with an I.C.E.R. and when he called for backup, Koenig answered and learned his security clearance passcode while Hartley's team questioned the logistics of the mission.

The mission went ahead and, while Antoine Triplett disguised himself as General Jones with the rest of the team acting as his escort, Koenig sat with Phil Coulson in the Playground as Coulson used a voice box to pretend to be Glenn Talbot, gaining the team access to the base. As the mission was being completed, Isabelle Hartley found the Obelisk, but was attacked by Carl Creel. Koenig advised Coulson as Hartley's life became endangered due to touching the Obelisk and the alarms being sounded across the base; however, Coulson ordered them to continue the mission regardless of Hartley's safety and steal a Quinjet.

Coulson said he wanted inventory done before Koenig returned. Alphonso Mackenzie won his bet against Lance Hunter so Hunter was forced to do inventory. Mackenzie told him that sevens with the line across them drove Koenig crazy.

You're going to want to make your next right. Next right, unless you want to spend your last night on Earth in the hotel HYDRA.

S.H.I.E.L.D. arranged to extract Raina when she was being pursued by HYDRA operatives sent by Daniel Whitehall and led by Agent 33. As Raina attempted to run away, Koenig waited on a street corner for her to pass and sent her around the corner to see his brother; although Raina remained skeptical, she had no choice but to follow Koenig's instructions and managed to avoid detection from Whitehall's soldiers.

Once Raina had been successfully extracted by Sam Koenig, Billy Koenig reported to Phil Coulson back on the Bus to update him, noting that the HYDRA team was being led by Agent 33 who looked exactly like Melinda May despite a large facial scar, which Sam called badass. Koenig told Coulson that it seemed that Whitehall intended to kidnap Raina and not kill her, so Coulson told them to wait for an extraction team while Koenig continued to argue with his brother who was excited to meet May.

Koenig was beside Raina when he heard a knock at the door, which he noted was not Sam's usual knock. He drew his gun but lowered it when the guest was revealed to be Skye who had come to collect Raina, using her S.H.I.E.L.D. Lanyard to identify herself while mocking Koenig's paranoia and mistaking him for his brother. As they made their way outside to extract Raina, they were suddenly attacked by Agent 33; while Skye battled the assassin, Koenig took Raina out the back stairs.

Onboard the Bus, Koenig explained to Antoine Triplett why they left Agent 33 alive when he, Skye, and Raina departed, claiming that it was too dangerous and they barely made it out safely themselves before mocking Agent 33 for her robotic voice. When Triplett saw Billy and Sam side by side, he asked them how many siblings Koenig had. The brothers both jokingly said thirteen at the same time and took great pleasure in Triplett's shocked reaction, noting that the joke surprised people every time they used it, but never gave a definitive answer to his question.

The Bus was suddenly intercepted by four HYDRA Quinjets. As the team tried to work out what was happening, a message came through from Daniel Whitehall ordering them to surrender or be shot from the sky. When Grant Ward boarded the Bus to retrieve Raina and to capture Skye, Koenig joined the rest of the agents in drawing his gun and aiming it at Ward in an attempt to protect the Bus. Ward promised not to hurt the occupants if they cooperated. Though they had him in a crossfire, they decided not to shoot and were forced to allow Ward to leave with the women.

Koenig strapped in as Melinda May and Antoine Triplett combined their piloting skills to save the Bus from destruction from four HYDRA Quinjets.

When Triplett asked Sam where his brother was, he gave a cryptic message that Billy needed to recharge his batteries; Triplett did not appreciate the answer.

Retrieved from "https://marvelcomicsfanon.fandom.com/wiki/Billy_Koenig_(Earth-1010)?oldid=186352"
Community content is available under CC-BY-SA unless otherwise noted.