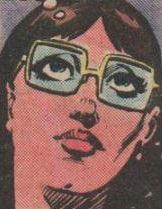 Betsy Beatty was under threat from Kingpin in order to make Melvin Potter cooperate with him. Potter was forced to make armored suits for Fisk and his associates. He was warned to never let anyone into his workshop otherwise Beatty would be hurt.

When Daredevil found the workshop, Potter attacked him before breaking down crying that he should not have been there because they would hurt Beatty. Murdock promised he would protect her from Fisk if Potter would build him a suit.

After Potter completed Daredevil's Suit, Murdock reassured him that he would protect Beatty.

Retrieved from "https://marvelcomicsfanon.fandom.com/wiki/Betsy_Beatty_(Earth-1010)?oldid=189985"
Community content is available under CC-BY-SA unless otherwise noted.