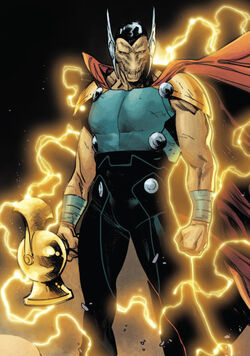 So long as I continue to be worthy, I will bring honor to your name, friend Thor.

Beta Ray Bill lived on the planet of Korbin, which was located within the same solar system as Muspelheim, home to the Fire Demons and their lord Surtur. However, the citizens of Korbin simply believed Muspelheim to be their sun, as they got all of their energy from it.

Bill was a simple family man, living with his wife and two daughters when one day, Fire Demons erupted from Muspelheim and began laying waste to Korbin. Only a few hundred of their people were able to escape the slaughter. Bill was lucky, but his family was not. With most of his people injured and near death, he volunteered to become the guardian to watch over them and find them a new home while they rested in stasis.

For years, Bill traveled the galaxy in the Korbinite's ship, trying to find a suitable home. This eventually led him into contact with Thor Odinson, who was at the time on a mission against Surtur himself. Bill initially believed Thor to be a hostile and engaged him in battle, using Thor's own weapon, Mjolnir against him. Thor was dumbstruck by this, and both of them were taken off guard when Bill was teleported to Asgard, due to wielding Mjolnir without Odin's blessing.

Odin was fascinated with Bill's history and his worthiness, and allowed him to maintain temporary ownership over the hammer while he joined the forces of Asgard in an assault on Muspelheim. This led to he and Thor finding common ground, and coming to consider each other valued allies.

During the battle of Muspelheim, Mjolnir was damaged and fractured. One of the fragments ended up being used by the Dwarves of Nidavelir, who fused it with Thor's old battle-axe, Jarnbjorn. Bill was gifted with Jarnbjorn, which now carried the same properties as Mjolnir, permanently gifting him with the power of Thor.

He then returned to his original mission of finding a new home for his people, refusing to accept help from the Asgardians, not wanting to impose on their peace or force the Korbinites to co-exist with another race. However, his continued search did not last long, as his ship got caught in a wormhole that opened on the planet Sakaar. The ship was badly damaged, and several Korbinites perished in the crash landing. He did what he could to protect the ship from the scavengers on Sakaar, but ended up being captured and enlisted in the Grandmaster's Contest of Champions.

Bill's spirit had been broken. He had failed his people and was now the slave of a madman. However, after about a year of being forced to compete in the Contest, a squadron of heroes across the galaxy, mostly from Earth, were dropped off by the Grandmaster's daughter, Voyager. One of these heroes was Thor, who Bill was ecstatic to see.

He ended up working alongside the Earth heroes when they staged a rebellion against the Grandmaster, which ultimately proved successful. However, after their victory, Bill was reminded he had lost his purpose. However, one of the other contestants, Gamora, offered Bill a place with the Guardians of the Galaxy, who had given several other wayward warriors a home and a purpose. He gratefully accepted her offer, and has finally begun to feel like he is doing right once more.

Retrieved from "https://marvelcomicsfanon.fandom.com/wiki/Beta_Ray_Bill_(Earth-101)?oldid=250173"
Community content is available under CC-BY-SA unless otherwise noted.