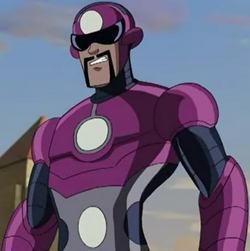 I wouldn't expect you to understand the inner working of my mind. After all, I am the smartest man alive.

Bentley Whitman was always an arrogant man with a superiority complex. This led to him exploiting his genius level intellect into creating anti-gravity discs so that he could pretend to be a superhero. Dubbing himself the Wizard, he decided to put together a team to challenge the Fantastic Four, and ended up recruiting Ulysses Klaw and Whirlwind.

When they were unable to recruit a fourth member, they ended up kidnapping and brainwashing the Queen of the Inhumans, Medusa. This proved to be a fatal mistake, as the Fantastic Four teamed up with the Inhuman Royal Family to defeat the Frightful Four. While Medusa was liberated, Klaw managed to escape, leaving Wizard and Whirlwind to be captured.

However, during transportation to the Raft, Wizard was liberated by the Advanced Idea Mechanics, who sought to take advantage of his genius. He vehemently agreed to work for them, and would spend the next few years menacing the Avengers and the Fantastic Four.

After AIM was crippled following the misuse of the Power Stone by the Scientist Supreme, Wizard decided to take control of his own faction. He led them out of the United States and set up a safe house in Eastern Europe.

They eventually attempted to raid Latveria and steal some of Doctor Doom's technology, only for the Wizard to be captured by Doom himself. He was then stripped of his armor and brought to the town square, where Doom berated him for his arrogance to call himself the smartest man alive, and then asked the people what the sentence for a thief should be. It was an overwhelming request for execution, so Doom obliged and beheaded the Wizard in front of his subjects.

Retrieved from "https://marvelcomicsfanon.fandom.com/wiki/Bentley_Whitman_(Earth-101)?oldid=249560"
Community content is available under CC-BY-SA unless otherwise noted.