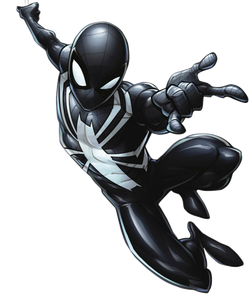 Organic Costume Generation/Manipulation- A combination of his connection to a Spider-Totem and his natural spider physiology, Spider-Boy creates his costume by tapping into the power of the Scion within him. When this is done, every pore in his body releases large amounts of webbing that surround and bind him in a cocoon. Moments later, his insignia emblazes itself on its front, and he bursts out in full costume. The costume is similar to Silk's in that it is made of hardened, complex webbing that clings to his body like a second skin. Removal is accomplished by simply tearing off the suit, a stressless task due to the fact that Benjy can produce a new one on the fly. The webbing that makes up the suit can also be slightly separated from the main body and used to further anchor Spider-Boy (or any chosen target) to a nearby surface or assist in his web-slinging. It can also be used to stick things to his body with greater strength than a cloth costume could muster, virtually guaranteeing that he won't drop anything (or anyone). The suit's design is similar to that worn by his "Uncle" Kaine in his early years, being a dark blue (almost black) with a chaotic but stylish web design patterned all over them. The chest is emblazoned with a purple spider-symbol and the eyepieces are a similar color.

Retrieved from "https://marvelcomicsfanon.fandom.com/wiki/Benjamin_Richard_Parker_(Earth-982B)?oldid=219945"
Community content is available under CC-BY-SA unless otherwise noted.