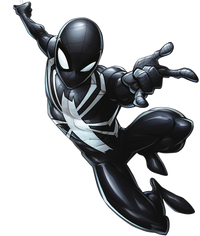 Symbiote Generation and Affinity - Due to his exposure to the Carnage symbiote as a baby, Benjy's blood and cells were modified to produce symbiote tissue. As a young man, in a manner similar to Cletus Kasady, he can freely produce this to cover his body; effectively producing a symbiote for his use. As he grew up with this power (though dormant) and the symbiotic matter he creates does not initially display the intelligence or maliciousness of its ilk, he can easily control it without suffering from increased bloodlust or aggression. The most common use of this ability is the creation of his costume, Spider-Boy modifying his symbiote(s) to take on an appearance similar to April Parker's Spider-Girl/symbiote hybrid appearance (though with the blue being changed to a shade of green, there being no protruding hair, and it now fitting the male form). According to William Connors, Benjy's blood contains fragments of the original symbiote, likely a genetic inheritance from his father. This fusing with the infection of the Carnage symbiote is likely why such an array of colors is available to Spider-Boy, as well as why his symbiote appears initially passive.

Sonic and heat- Due to his costume being primarily produced of symbiote matter, Spider-Boy gains their vulnerabilities to loud noises and intense heat. Being exposed to either causes his costume to visibly retreat and attempt to re-enter his body, depriving him of extra protection and potentially exposing his identity. His past experience of hearing loss doubles his weakness to sound, with him instinctually clasping his hands over his ears and attempting to enter a fetal position when exposed to large amount of it.

Retrieved from "https://marvelcomicsfanon.fandom.com/wiki/Benjamin_Richard_Parker_(Earth-982B)?oldid=218932"
Community content is available under CC-BY-SA unless otherwise noted.