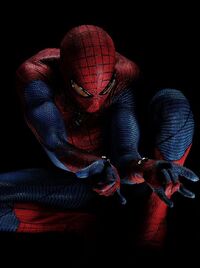 My father taught me "With Great Power comes Great Responsibility. But is that responsibility is too much for one man to handle?

As part of the Great Hunt initiated by Morlun, he joins the Spider-Army to stop the Inheritors.

He and Mayday Parker (Earth-982) had a relationship and talk about what it's like to lose someone important. But thanks to teamwork they understand that heroes don't kill and do the right thing. After the war is over they say farewell and go to their own timelines.

Unlike his Earth-982 counterpart he uses Web Shooters like Mayday Earth-982. Also his sister uses Organic Webbing like Benjy Parker and Penelope Parker Earth-11. My version of Benjy Parker got dark red hair not brown. He's wearing a Spidey costume from his father (The suit based of the 2012 movie suit) at first but then wears another like Mayday wears the Ben Reilly suit in Earth-982.

Retrieved from "https://marvelcomicsfanon.fandom.com/wiki/Benjamin_Richard_Parker_(Earth-9821610)?oldid=255398"
Community content is available under CC-BY-SA unless otherwise noted.