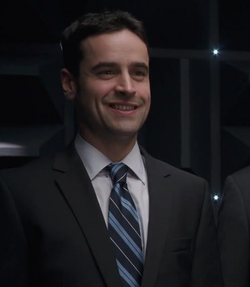 Benjamin "Benny" Pollack is a former bank robber, who has since become a researcher for S.H.I.E.L.D., accompanied by his girlfriend Claire Wise.

The pair had found a Chitauri weapon in the aftermath of the battle for New York, and after Benny discovered how to operate it they used it to embark on a crime spree. The pair were found by Agent Jasper Sitwell, who rather than try to bring them to justice, inducted them into S.H.I.E.L.D. as a researcher and an assistant instead.

Benny has exhibited a technical aptitude sufficient to get a piece of alien technology to function when trained scientists were at a loss to operate it.

Benny's name, along the name of his girlfriend (Claire), is an homage to the infamous robbers Bonnie and Clyde.

Retrieved from "https://marvelcomicsfanon.fandom.com/wiki/Benjamin_Pollack_(Earth-1010)?oldid=98236"
Community content is available under CC-BY-SA unless otherwise noted.