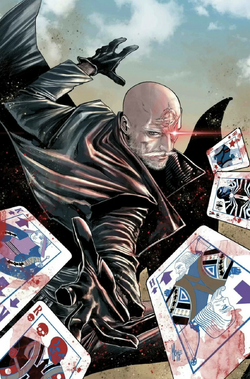 Hit or miss? No. I never miss.

Benjamin Poindexter was a skilled police officer with a record of always eliminating targets of interest in one shot. He was eventually assigned to the case investigating the Kingpin, and was even able to get close enough to take a shot, but he hesitated.

The Kingpin was then able to offer him a much better paying and more satisfying job. After agreeing, he was knocked unconscious and woke up in a secluded Hydra base, where he was put through extensive training to put his loyalty to the test. His acute marksmanship quickly made Hydra aware of the benefits of him, and redeployed him back into the field under the command of the Kingpin.

Naming himself Bullseye, he quickly became an infamous assassin, which brought him into conflict with the vigilante Daredevil. In a later battle, he would be tasked with killing Daredevil's lover and a traitor to the Kingpin; Elektra. After a lengthy and bloody fight, Bullseye was able to drive her own sai through her heart, feeling her blood drip down his arm as he grinned at Daredevil.

For the next several years, he found his opposition growing in size, as Hydra's ambitions grew in size. He was hesitant to go along with their plans of enacting world domination, but after being promised even more money from the Kingpin, he went along with it.

He would later be present at Hydra's secret base located in the Empire State Building when the Avengers enacted a final raid against Hydra. After fighting off a few of the Avengers, Bullseye quickly realized it was a losing battle, and attempted to make his escape. However, he was unaware that Hydra's top assassin, the Winter Soldier, had recently broken free from his programming, and confronted Bullseye during his attempted escape. The two battled, but it ended when the Winter Soldier lunged a knife straight through Bullseye's heart, feeling his blood drip down his arm.

Retrieved from "https://marvelcomicsfanon.fandom.com/wiki/Benjamin_Poindexter_(Earth-101)?oldid=250759"
Community content is available under CC-BY-SA unless otherwise noted.