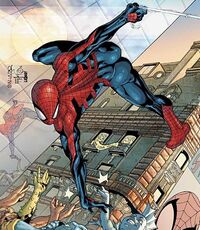 Ben and his twin sister; May were born to photographer Peter Parker and his super model wife Mary Jane Watson-Parker. At this point in Peter's life, he had retired as Spider-Man since New York had entered a "Golden Age" where the streets were clean and there was rarely any superpowered activity. Due to this, Ben and May lived a relatively normal life and grew up unaware their father was Spider-Man.

In his sophomore year of high school, Ben was much like his father. Anti-social and had a knack for science, Ben also liked to read comics and play video games. During a seemingly normal day during high school, Ben began to feel strange during class and his hands began violently shaking until he suddenly he had a muscle spasm and ended up breaking his desk in half.

Ben then went to the bathroom and saw that he had developed muscles and had grown talons in his fingers, he then checked the mirror and noticed he had grown fangs. Freaked out, Ben leaves school and runs home. With mutants still being frowned upon in society, Ben was too afraid to tell his parents and so he confided in his twin to which he found out she had also developed powers a week earlier.

Ben and May decided to go to Stark Industries to learn more about their powers, at this point in time Stark Industries had a division that would help individuals who had recently manifested superpowers and would help them understand and to control them whether they were mutants, mutates or Inhumans.

Ben and May eventually discovered they were mutants and had abilities similar to the superhero Spider-Man. After a few weeks of training, the two had managed to come to grips with their powers. They eventually suspected their father was Spider-Man and decided to confront him about it, Peter initially denied this but admitted to it when he saw his children display spider-like abilities. Peter would then go on to explain to his children about how he became Spider-Man and all of his history up until the point he retired.

A few months later, superpowered criminal activity began to increase but Sam had to take action as one day a superpowered criminal attacked a mall he was currently at. Ben would use his organic webbing to web a disguise for himself and would battle the criminal and eventually defeat him. Ben would realize crime is starting to become prominent in New York again and created his own costume and become the new Spider-Man.

Not long after, May would use her powers to help others too and become Spider-Woman. Spider-Man would help his sister battle villains on occasion but the two would often operate solo instead of being partners.

Retrieved from "https://marvelcomicsfanon.fandom.com/wiki/Benjamin_Parker_II_(Earth-983)?oldid=193367"
Community content is available under CC-BY-SA unless otherwise noted.